The Debate on Dengvaxia Among Scientists

February 09, 2018
While there was a debate on Dengvaxia between the Philippines' Public Attorney's Office and the group called Doctors for Public Welfare, scientists from the University of the Philippines (UP) were arguing with scientists from Sanofi, the maker of Dengvaxia, in the Journal of Clinical Epidemiology. Antonio Dans and coworkers from UP Manila, the Asia-Pacific Center for Evidence-Based Healthcare, and McMaster University in Canada criticized the Dengvaxia clinical trials. They wrote, "The selective reporting and inappropriate subgroup claims mask the potential harm of dengue mass vaccination programs." Sanofi scientists maintained that the subgroup analysis was justified. Not convinced with Sanofi's response, Dans et al. wrote another comment where they stated:


"The failure to recognize the signals of harm in the Hadinegoro article has, through a publicly funded vaccination program in the Philippines, put around 830,000 schoolchildren potentially at risk, given that prior dengue serostatus in these children is not known. Companies such as Sanofi, and the scientists who work with them, need to acknowledge the harm signals before being pushed into doing so by public scrutiny. Such scrutiny will often be absent."

Worth noting in the response of Sanofi's scientists is the denial of antibody dependent enhancement, which has been recently demonstrated by Katzelnick et al. in a paper published in Science:


"Using multiple statistical approaches to study a long-term pediatric cohort in Nicaragua, we show that risk of severe dengue disease is highest within a narrow range of preexisting anti-DENV antibody titers."

Previous exposure to dengue is critical to the severity of a second dengue infection. This is the primary reason why Sanofi issued a press release stating the following:


For those not previously infected by dengue virus, however, the analysis found that in the longer term, more cases of severe disease could occur following vaccination upon a subsequent dengue infection.

Nevertheless, all of the above point to the conclusion that the mass Dengvaxia program launched in the Philippines was wrong. And the Philippines did have enough information back then to make the right decision. For one, a study on Dengue incidences in Cebu City in the Philippines definitely did not warrant a mass vaccination program of children aged 9 years and above. The study, published in PLOS in February 2016, provided the distribution of dengue infections in the population of Cebu City. The distribution shows that in the trageted age range, the benefit of vaccination is almost non-existent.


In the above graph, HAI refers to dengue virus hemagglutination inhibition (HAI) assay that identifies subclinical infections. Negative HAI are those individuals who have not been infected with dengue. These are also called seronegative. Monotypic refers to individuals that have been infected once. Multypic corresponds to more than one previous dengue infection. Dengvaxia is touted to be beneficial to those who have been infected once. And Sanofi has warned against its use for those who have not been infected. Looking at the 6-15 years group in the above graph, Dengvaxia will benefit only a very small fraction (about 5%), but can potentially harm a much larger fraction (about 20%). And it is completely unnecessary for 75% of the age group. Dengvaxia is not even warranted.

A friend on Facebook shared with me the following list of recommendations on how we could maintain trust in vaccines: 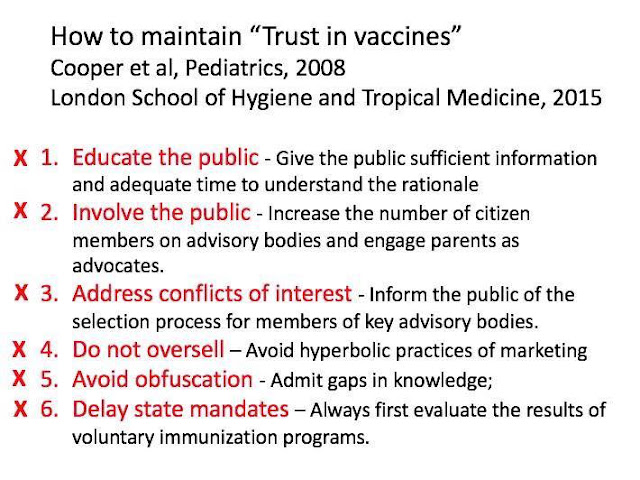 On all six guidelines, the Aquino's Dengvaxia's program has miserably failed. The growing distrust in the Philippines towards vaccines came from its government. That trust can only be regained if the Philippine government takes responsibility and holds everyone accountable.