It Is Okay To Be Anxious But Not Worried

February 27, 2018
Being anxious before an exam is a factor that can certainly influence a child's performance. Five years ago, I posted on this blog a piece about test anxiety.

Back in Chicago, when I was a teaching assistant in General Chemistry, the professor used the word "party" whenever referring to an exam inside the classroom. With every exam, the professor also added humorous cartoons on the first page. The purpose is to somehow relieve test anxiety which significantly impairs a student's academic performance. Taking an exam seriously and preparing for it is good. However, worrying about an exam needlessly with particular emphasis on scores as measures of success or failure is harmful. This is test anxiety. With education reforms, tests serve as measures of learning outcomes. Test scores are sought to gauge whether a given educational reform is working or not. With higher stakes, greater attention is given to scores in these tests. When tests are used not just to assess a student's learning, but also the future of an educational program, the pressure becomes higher. Grades, which are partly, if not dominantly determined by scores in these exams, can affect a student's future. Admissions to special programs in high schools, admission to an elite university, offer of employment from a good firm can depend on grades. Thus, society places a lot of premium on these tests. Being concerned with exams is healthy. These are necessary tools for assessment. However, when a student becomes more afraid of failure instead of seeing the exam as a challenge, a possibility to shine, then a debilitating test anxiety comes into play.

Test anxiety, as pointed out by the principals in my children's elementary school, is of prime concern, as it appears to debilitate students. I found a set of recommendations provided by the US Department of Education to help students overcome test anxiety and these are likewise provided in this blog.

It does not help to tell the child to relax, to think about something else, or stop worrying. But there are ways to reduce test anxiety. Encourage your child to do these things:

Recent research does show that the first sentence in the above recommendations is correct: "It does not help to tell the child to relax, to think about something else, or stop worrying." Relaxing does not correlate with better performance. Shannon Brady and coworkers at Stanford University write:

Students’ desire to do well on tests can lead them to experience anxiety (Beilock & Ramirez, 2011). Unfortunately, the default interpretation of anxiety is that it is harmful (Johns, Inzlicht, & Schmader, 2008). Thus, folk wisdom holds that people should manage anxiety by “calming down” to enhance their performance on test day (Brooks, 2014). Indeed, this is even the advice offered by one of the largest testing organizations in the United States (ACT, 2012).Unfortunately, there are two problems with this approach.

First, suppressing negative emotions is often difficult, requiring attention and effort (Gross, 2014). Second, the recommendation to calm down relies on an overly simplified model of how anxiety affects performance. Although people often think of test anxiety as a unitary emotional experience, previous research has identified two components of test anxiety, emotionality and worry, and has determined that these components affect performance in different, even opposing, ways (Cassady & Johnson, 2002; Liebert & Morris, 1967; Schwarzer, 1984).

Being anxious is not necessarily detrimental. In fact, the emotionality component is now known to enhance student performance. It is alright to be excited about an exam. From research, it is now known that simply telling students that arousal or being excited (the emotional component of test anxiety) can in fact improve performance. This is called "reappraising stress arousal". And it could be as simple as telling the students before the exam the following:


We know that taking an exam can be a stressful experience, and so before reminding you of exam details, we wanted to provide a note of research-based encouragement: People think that feeling anxious while taking a test will make them do poorly on the test. However, recent research suggests that arousal doesn’t generally hurt performance
on tests and can even help performance. People who feel
anxious during a test might actually do better. This means that you shouldn’t feel concerned if you do feel anxious while studying for or taking tomorrow’s exam. If you find yourself feeling anxious, simply remind yourself that your arousal could be helping you do well.

If the emotional component can enhance performance, what is the reason then behind the negative correlation between test anxiety and performance? It is the "worrying" part. Worrying requires mental effort and therefore adds to the cognitive load of a student. The student then has less of his or her brain to work on the exam. 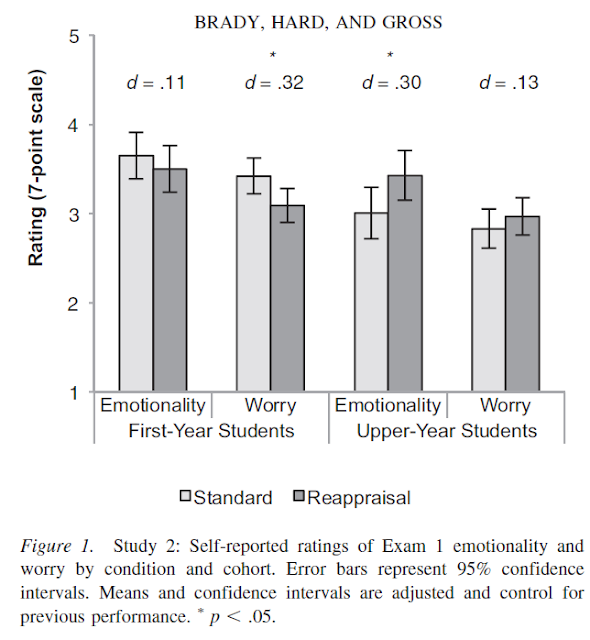 The first graph informs us when intervention is most effective. For college students, the reappraisal only works for first year students. For upper-year students, their perception is no longer malleable. With age, test anxiety (both emotionality and worry) becomes fixed and appears to be no longer responsive to intervention. The second graph shows the impact of "reappraising stress arousal". It is very significant and is almost the difference between two letter grades.