January 06, 2018
This blog received thousands of views from the Philippines this morning. A previous post on this blog, "When Scholarships Become Oppressive", apparently caught the attention of a representative in the Philippine Congress, Koko Nograles.

It is indeed good to see that the sad plight of teacher-scholars in the Philippines has finally reached the attention of someone in Congress. Whether this would amount to anything remains to be seen. CNN Philippines earlier noted a previous post by Congressman Nograles on the same Facebook page. The post was also about the Commission on Higher Education.

Below is one of the images shared in the above post: 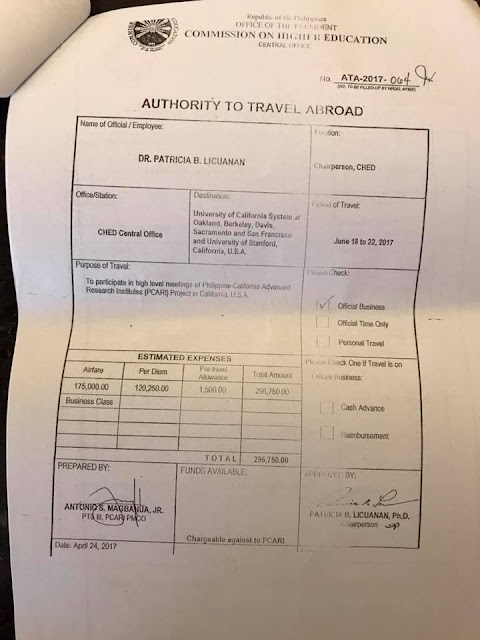 The chairperson of the Commission on Higher Education in the Philippines apparently takes business class. The CNN Philippines article adds the following explanation:

Nograles also accused her of traveling expensively.
However, CHED International Affairs Staff Director Atty. Lily Frieda Milla said Licuanan has vertigo and clarified she's allowed to fly via business class "for long-haul flights," as stated which is allowed under the travel guidelines stated in the Office of the President Memorandum Circular No. 7 (2010). and because of her vertigo."
The memorandum provides that airfares for government officials shall be "limited to restricted economy class" except for flights beyond four hours.

If we can easily sympathize and understand why vertigo can justify flying in business class then it should be a lot more straightforward to see why it is imperative that teachers who are breadwinners of their families receive their alowances on time, and not half a year later. Oftentimes, we focus so much on corruption thinking that it is the biggest evil in an administration when incompetence is equally depraved.