Those Three Stripes on an Academic Gown

April 22, 2017
A person who receives a doctorate degree gets to wear an academic dress with three stripes. During the commencement exercise, the new PhD degree holder likewise gets a hood. The gown is the culmination of painstaking years of academic and research work. It is a symbol that someone has contributed to the advancement of human knowledge. Not everyone who wears such a special robe and hood, however, has gone through the same years of graduate school education. Zachary Crockett writes in Priceonomics:


But for others present on commencement day, the struggle is not so real. Joining the students on stage, celebrities and business moguls — Mike Tyson, Kylie Minogue, Oprah, Ben Affleck, and Bill Gates among them — flock to college campuses to receive “honorary” doctorate degrees. Unlike the students, these luminaries are given a free pass: universities allow them to bypass all of the usual requirements. Though these degrees are more ornamental than functional, the practice of handing them out stems from a somewhat ignoble past.

Even Kermit the Frog has received an honorary degree from Southampton College.


...when Thomas Jefferson founded the University of Virginia, he explicitly banned honorary degrees, fearing that they would be awarded based on “political or religious enthusiasms rather than on scholarly considerations....

In the Philippines, honorary degrees are under the supervision of the country's Commisssion on Higher Education. Rappler notes:


The commission also has the prerogative to deny or withdraw the conferment of an honorary degree if the submitted credentials are fabricated, or "when the recipient's conduct or stand on certain issues contravenes public morals and policy."

Recently, I have seen several posts on social media from alumni of the University of the Philippines objecting to a plan of awarding an honorary degree to President Rodrigo Duterte. The issue is now settled since the president has stated no interest in receiving such a degree. Antonio Contreras of the Manila Times, however, has this to say: 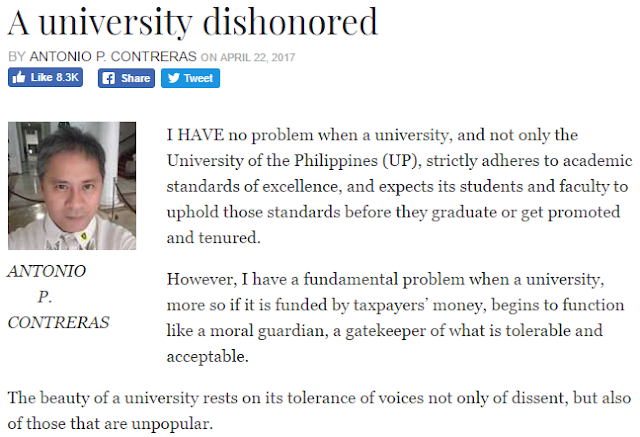 The university, of course, is not a judicial body. It cannot and should not render judgment. One example of a student protesting the planned conferment of an honorary degree to Duterte shows not just an indictment but also a judgment against the president:

Across the Pacific and several hundred years later, the fears of Thomas Jefferon ring true.