April 28, 2017
My seven-year old daughter was watching me last night as I was preparing for this morning's lecture. This lecture is the first part of a series on carbon dioxide as a greenhouse gas. I always end my General Chemistry course with this topic and this year, it is timely to highlight the most recent report from the Arctic Council. The changes in snow, sea ice, and permafrost are undeniable. But my daughter had a different idea. She wanted to be a part of the lecture and decided to write a short story that I could then share with my students. So last night, she wrote a short story called "The Icy Sea": 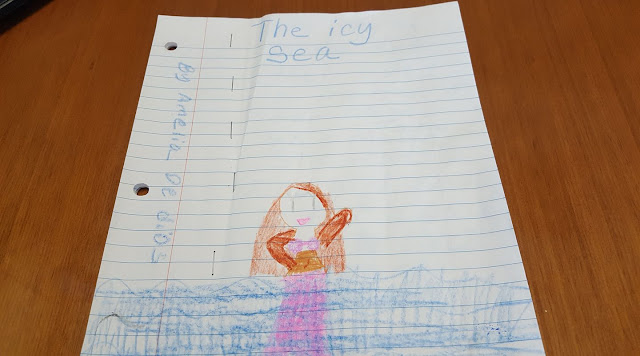 Long, long ago in the sea, there lived a mermaid. Her name was Tara. She was a kind girl. Not so far away, there lived a wizard named Addison and she can make things cold. One day, Addison was so bored. She has not made anything cold yet so she decided one of the worst plans ever. She was going to freeze the sea! When Tara heard about what was going to happen she was so sad. Tara cried. Then her mother came and she said the only way to stop it was to eat a whole hotdog! Tara did not like hotdogs, but she wanted to save her family so she went to K mart and got a hotdog and ate it all up. Addison was never seen forever and Tara lived happily ever after.

My daughter was indeed looking at the slides I was making for my lecture. I was planning to show after all the decreasing amount of sea ice in the Arctic region. Of course, my problem was that it seemed mermaids are more than happy not to see ice in the seas. Mermaids are not polar bears after all. A warming arctic can indeed be beneficial for those who are looking forward to less ice and warmer weather. But as The Economist points out, "Commercial opportunities are vastly outweighed by damage to the climate". Polar bears are real while mermaids are not.

Still, my daughter provided me with a bridge between human activity and climate change. Although seemingly out of place, eating hotdogs, or eating meat and any processed food, can actually bring greater changes to the environment than eating grains or tubers. Wendee Holtcamp seems to think so:


So, it does make sense for Tara to eat a whole hot dog to prevent the seas from freezing. Needless to say, I did start my lecture this morning with my daughter's story. And it was well received. I am reminded of a previous post on this blog, State of the Heart, in which I quoted Peter Gruber from Psychology Today:


PowerPoint presentations may be powered by state-of-the-art technology. But reams of data rarely engage people to move them to action. Stories, on the other hand, are state-of-the-heart technology—they connect us to others. They provide emotional transportation, moving people to take action on your cause because they can very quickly come to psychologically identify with the characters in a narrative or share an experience—courtesy of the images evoked in the telling.

The story of my daughter brought life to my lecture. It provided the first spark. So we could then focus and get more from the stories people at the Arctic are telling us....


A changing environment - Snow, water, ice and permafrost in the Arctic (short version) from AMAP on Vimeo.