April 25, 2017
Back in June of 2016, the staff of the International Bank for Reconstruction and Development/ The World Bank produced a report on Basic Education in the Philippines. The report mainly examines how funds flow from the Department of Education and how these are spent in the schools. The report notes lack of transparency as well as efficiency, which greatly reduces the benefits of greater funding. However, even with an efficiently run bureaucracy, factors that negatively affect learning outcomes are very much present.


"With the exception of English at the elementary level, the average elementary or high school teacher could answer fewer than half of the questions on the subject content tests correctly. Since these tests are closely aligned with the curriculum, the results suggest that teachers face significant challenges in teaching a considerable portion of the current curriculum."

The following figure from the report tells a lot about the lack of subject content mastery of teachers in the Philippines: Most teachers cannot even answer half of the questions correctly.

There still exists a shortage in classrooms:

The poor quality of school infrastructure is likewise highlighted in a figure provided by the report:

Resources are not channeled to where these are most needed. The report concludes:

This fact is demonstrated in the following figure from the report where schools in highly urbanized cities face greater shortage in resources : 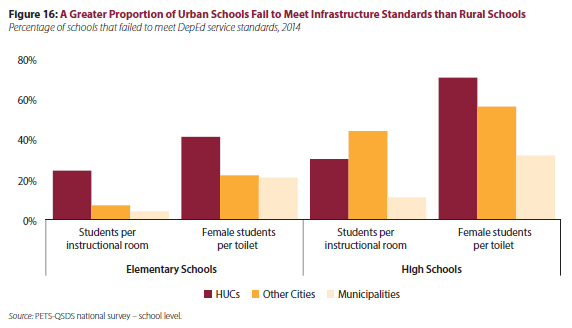 Aside from taking actions to improve teacher quality and increasing funds for school infrastructure, the report also notes the following factors that may help to increase learning outcomes. First, limiting the size of the school may improve the delivery of basic education since smaller schools tend to perform better. 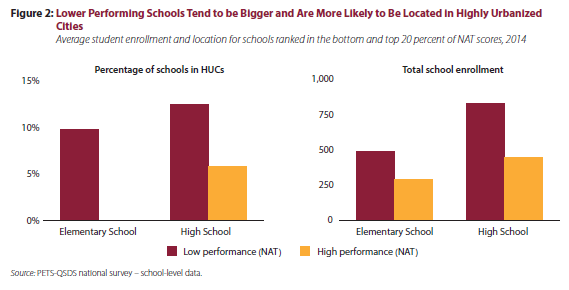 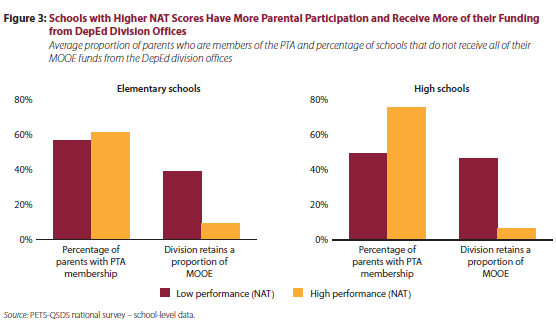