April 27, 2017
In a previous post on this blog, Do Computers Affect the Social Development of Our Children, a working paper by Fairlie and Kalil has been highlighted. Their findings show that computers do not negatively impact a child's social development. Children who use computers are equally likely (sometimes even more) to interact with others face to face. For younger children, there remains a concern on whether screen time is bad or good. There are obviously benefits to introduce young children to the use of technology. The question is whether there is a price to pay. Screen time right before bedtime is already known to affect sleep. The blue light from the screen interferes with the normal clock that our body uses to induce sleep. Now, there is a study that screen time in general during the day is correlated with less sleep time at night.

The study, published in Nature, comes from a survey of more than 700 families in the United Kingdom. Their findings is summarized as follows: "Every additional hour of tablet use was associated with 15.6 minutes less total sleep (on average, 26.4 minutes less of night-time sleep and 10.8 minutes more of daytime sleep)." Unlike television, screen time on smart devices actually increases the amount of naps during the day. These are the effects on children under the age of three in this survey. No correlation is found between screen time and the number of awakenings at night.

The authors, however, are quick to note that in a previous study they made on this same group of children, the use of touchscreen devices is found to correlate with early development of fine motor skills: 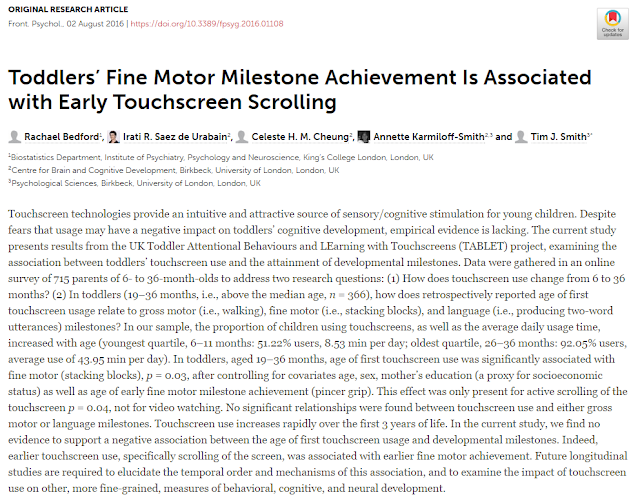 Clearly, a balance is needed so that young children benefit from screen time without its possible deleterious effects. The authors conclude, "Together, our findings emphasize the need for a more in-depth understanding of how to maximize benefits and minimize negative consequences of this modern technology."