November 06, 2016
Though data on learning outcomes are not easily available, some details regarding how the new curriculum of the Department of Education in the Philippines are now being told in scholarly publications. For instance, Lartec and coworkers have published their findings regarding the pilot schools of Mother Tongue - Based Multilingual Education (MTB-MLE) in Baguio City. The paper, "Strategies and Problems Encountered by Teachers in Implementing MotherTongue - Based Instruction in a Multilingual Classroom", provides qualitative data that suggest the following problems: the absence of books written in mother tongue, lack of vocabulary, and lack of teacher-training.

These problems especially the lack of qualified teachers should not be surprising. Even in a developed country, where multilingual education is being pursued, having an adequate number of teachers trained is a problem. The state of California this coming Tuesday is asking its citizens to vote for multilingual education. Teaching students through their mother tongue is the culturally correct thing to do. There is even evidence that this strategy yields better learning outcomes as it keeps students engaged. For the program to work, however, teachers are required and if the state of California does decide for multilingual education, it has to face the following reality. Ashley HopKinson at EdSource shares the following: 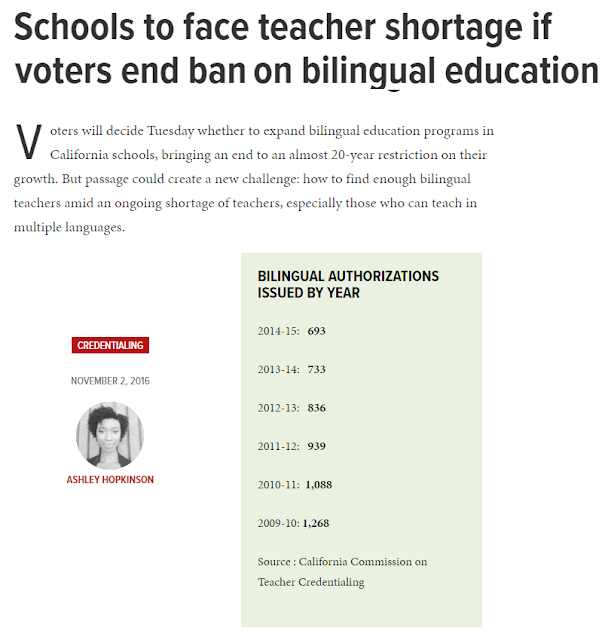 The same predicament holds true in other places. South Africa is another example, as reported in the Mediterrenean Journal of Social Science:

Abstract
Mother tongue instruction in education is practiced in many countries across the world. The South African scenario is unique in this regard. Whilst many nations have identified one national language by which their populace can be identified, in South Africa, there are eleven such languages. The problem is that many of the South African languages are indigenous to specific provinces. In the Limpopo province, for example, three official indigenous African languages are spoken. This makes instruction in the mother tongue complex. This study examined mother tongue instruction in schools in the Limpopo province. The aim of the study was to investigate whether mother tongue instruction is possible in a province that has three African indigenous languages, in addition to English and Afrikaans. Data was collected using questionnaires and interviews. The sample consisted of schools in areas of the province where the different languages are spoken. In addition, the sample also consisted of schools from multicultural settings, mainly found in urban areas. In total 12 schools were selected. The data was analysed qualitatively and quantitatively. The data revealed that mother tongue education is possible in situations where all the children speak one or two of the national languages. Where more than two languages are spoken as mother tongue, there are challenges determining the medium of instruction. The biggest challenge in such a case is the provision of learner-support materials (LSM). Another associated challenge is class size. Broader challenges include shortages of suitably qualified teachers. Recommendations of this study are: mother tongue instruction must be approached and funded systemically; learner support materials must be developed before implementation of such a system; mother tongue instruction should also be available in multicultural schools; school facilities should be standardised so that demand on well-resourced schools is minimised.

This blog has been pointing out several issues regarding the pedagogy in DepEd's K to 12. The above publications, on the other hand, only highlight the problems with implementation. But these problems cannot likewise be ignored. In the book, Educating for the 21st Century, an entire chapter entitled "For Whom Is K-12 Education: A Critical Look into Twenty-First Century Educational Policy and Curriculum in the Philippines", is devoted to DepEd's K to 12. The following are excerpts from the concluding section of the chapter that are worth our attention (I emphasize some of the lines): 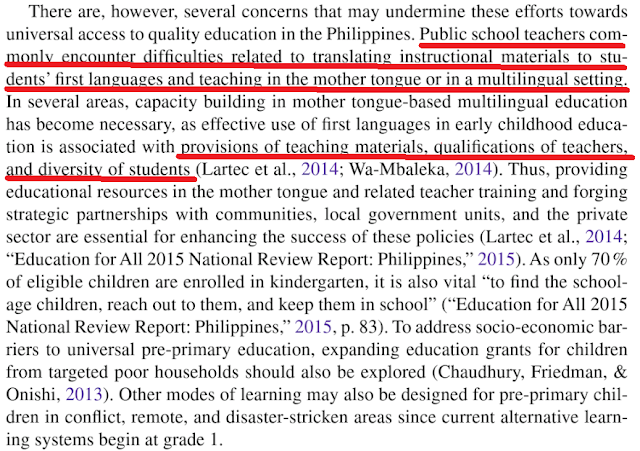 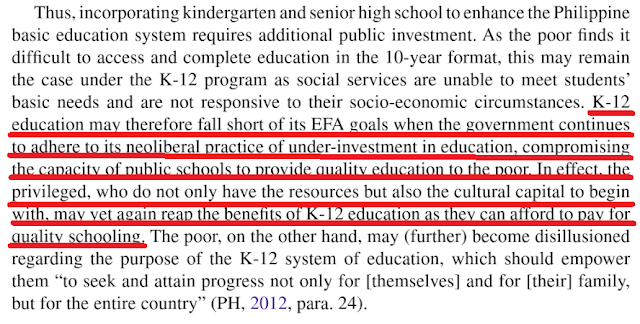 With the dearth of data on learning outcomes, it is not possible to gauge whether a curriculum is working or not. One can argue based on pedagogical grounds and data from other studies that a curriculum is problematic. However, by paying attention to how a curriculum is being implemented, a lot could be said already. As noted above, when a curriculum is so poorly implemented, those that have resources gain a tremendous advantage. In this case, the children of wealthy families are given more opportunities while the poor become more buried under a tremendous gap. DepEd's K to 12, after all these years, should be seen as an instrument that not only fails to address the real problems of basic education but also exacerbates the situation. Poverty is one of the biggest factors that affect basic education. A policy that heightens the grip of poverty on schooling only denies the poor their right to education and prevents society from realizing equity.