September 22, 2016
"It Takes a Village" probably ranks high in the list of popular proverbs. Even Hillary Clinton used it as a title for her book. The proverb rings true especially in close-knit neighborhoods or communities. Unfortunately, with increasing isolation, we probably need to take a step back and realize that first, "It takes a family to raise a child." In education, numerous studies have strongly suggested that poverty profoundly affects learning outcomes. Perhaps, underneath this is the fact that the family deeply influences education. Such impact can be easily seen when one compares the academic performance of children who are in foster care against those who are not. The chasm observed in this comparison is actually much wider than the gap seen due to poverty.

The Center for the Future of Teaching and Learning at WestEd has been examining the academic performance of foster children in the states of California and Arizona. And their findings clearly show that children in foster care are really struggling in education. In their latest study from Arizona, the gap in dropout rates due to foster care is very much evident:

The gap is higher than the one correlated with poverty. And the same picture is essentially seen in math and reading scores in the elementary grades. 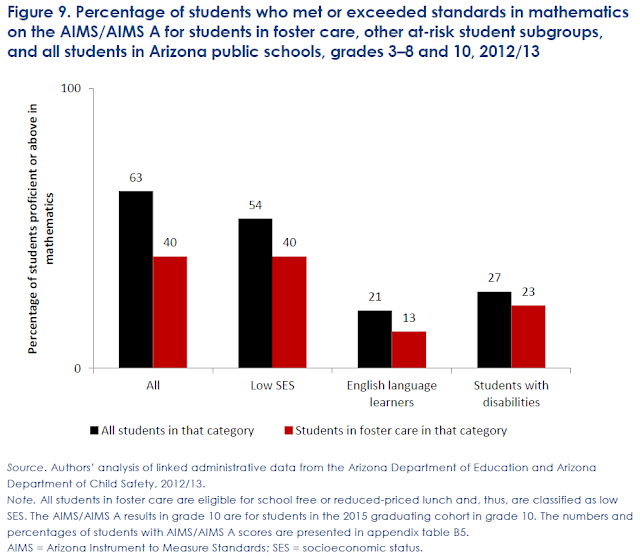 According to the LATimes, the situation in California is very similar.

Oftentimes, we easily see the broad picture but then we get lost in the details. Yes, "It takes a village to raise a child", but first, "It takes a family."