Millions of American Students Are Performing Above Their Current Grade Level

September 13, 2016
More than half of parents in America think their children are above average academically. Of course, it is not statistically possible for more than half of the students to be above average. It is stupid and yet, we, as parents, often cling on a single test score just to prove that our child is special. Our society is fundamentally competitive and the school simply serves as a breeding ground to amass an advantage over others. This obsession is so great that we sometimes reduce schooling to just reading and mathematics, for these are the subjects that come with standardized tests. First of all, standardized tests are normally designed to spot failures and not success. The scope of the items tested in any finite exam is finite, not unlimited. Most standardized exams are therefore more reliable in pinpointing deficiencies and not excellence.

Unfortunately, even researchers in higher education misinform parents. In a non peer-reviewed paper, a group of workers from various universities specializing on gifted or talented education, claims that a large percentage of American students are performing above their grade level. Anya Kamenetz adds a nice damper to this report. She quotes Andrew Ho of Harvard:


...Andrew Ho says this report from Makel and his colleagues isn't nearly as surprising as it might seem. Ho is a student measurement expert at the Harvard Graduate School of Education and has a word for the findings: "obviousness." He points out that large numbers of students will score both above and below the cutoff of a standardized test.
It's also important to note that a score on a single test is not synonymous with being ready to achieve at a given grade level — academically, socially or emotionally....

Browsing through Makel's paper shows that the researchers have indeed based their conclusion: Millions of American students are performing above grade level, on one piece of data, scores in standardized exams. Makel and coworkers have probably read what Alfie Kohn had to say regarding standardized testing and yet, have chosen to ignore these important findings from research:


Standardized-test scores often measure superficial thinking. In a study published in the Journal of Educational Psychology, elementary school students were classified as “actively” engaged in learning if they asked questions of themselves while they read and tried to connect what they were doing to past learning; and as “superficially” engaged if they just copied down answers, guessed a lot, and skipped the hard parts. It turned out that high scores on both the CTBS and the MAT were more likely to be found among students who exhibited the superficial approach to learning. Similar findings have emerged from studies of middle school students (also using the CTBS) and high school students (using the other SAT, the college-admission exam). To be sure, there are plenty of students who think deeply and score well on tests—and plenty of students who do neither. But, as a rule, it appears that standardized-test results are positively correlated with a shallow approach to learning.

Makel and coworkers have used standardized test scores in state exams to conclude that "Between 30 percent and 44 percent of Florida students scored at or above the next grade level in the spring of their current grade levels. For example, 42 percent of seventh-graders would have passed eighth-grade reading." A snapshot of reading scores in the NAEP, however, provides a different picture - in 2015, only 2 percent has reached the advanced level: 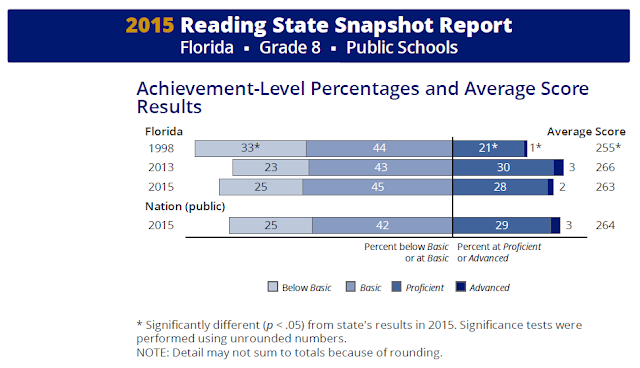 Nonetheless, it is irresponsible to assume that teachers in our schools do not regularly assess and that they do not adjust according to what their students need. Teachers do. Teachers figure out oftentimes with their own tools where their students are and teach accordingly. On more than one point, the work by Makel et al. is a sad blemish to education research.