July 21, 2016
In universities in the United States, an assistant professor usually spends a probationary period of six years before applying for promotion and tenure. Not receiving tenure at the end of the probationary period means an automatic dismissal from the university. Some are able to receive tenure before the end of six years if the dossier is good enough. Tenure is awarded by the president of the university upon the recommendation of the a university's committee on rank and tenure, which is composed of faculty members. The committee draws its decision based on the recommendation of the applicant's department, deans, and reviewers from other universities. The dossier is basically evaluated on an applicant's scholarly contribution, teaching, and service to the university and the community. One's scholarly contribution is based on publications in peer-reviewed journals as well as a record of acquiring competitive extramural research grants.

Tenure is awarded to protect academic freedom. Tenure is meant to protect educators. Professors with tenure cannot be easily dismissed. One exception is when an academic program is discontinued or when an academic department is eliminated. In this case, dismissal applies to all, tenured and non-tenured faculty. In the Philippines, with its first year of 11th grade in basic education, college enrollments are dramatically down, which has led to the dismissal of instructors in college. Rene Luis Tadle shares the following on Facebook: 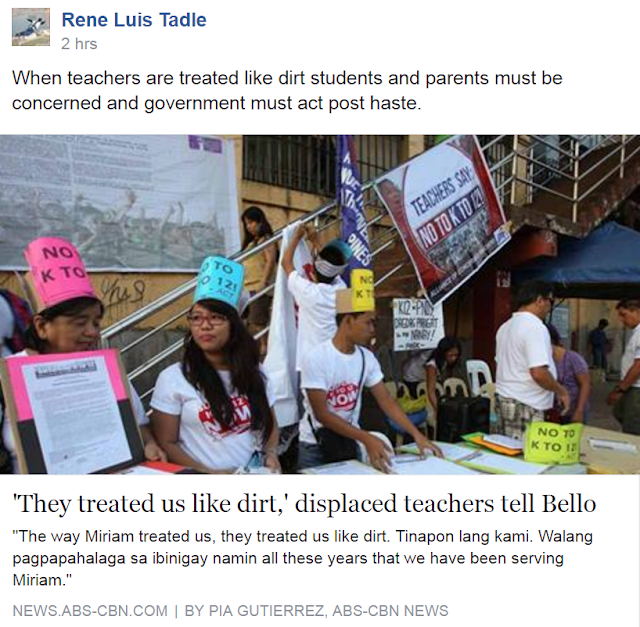 In response, Philippines' Labor Secretary Silvestre Bello has vowed to investigate immediately cases where college faculty members have been dismissed because of DepEd's K to 12. Educators do need the protection of tenure. And this protection is needed because educators are key to the quality of education.

Of course, tenure exists to preserve quality as well. For this reason, a clear demonstration of one's productivity is important to receive tenure. Although teacher groups in the Philippines are justified to defend tenure, one must not go as far as destroying what is required to get tenure. It is therefore rather confusing that some would ask for the probationary period to be decreased as reported by the Varsitarian of the University of Santo Tomas. 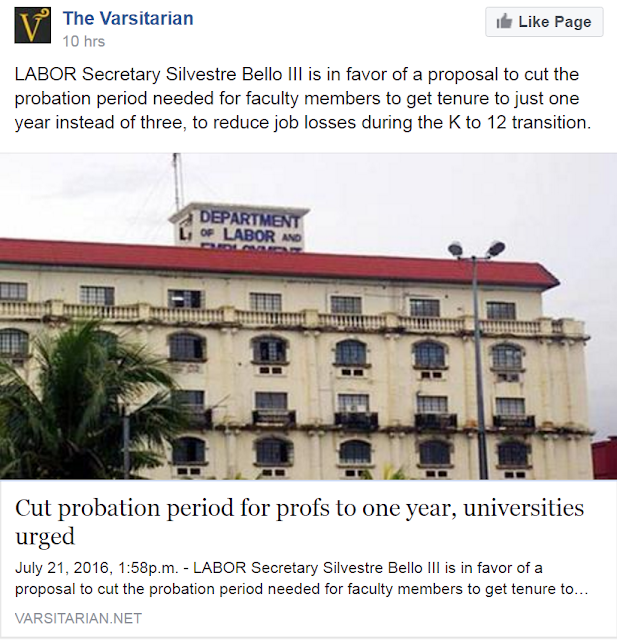 Teacher quality depends on selection and tenure. This principle applies not only to higher education but also basic education. In a recent report published by the National Center on Education and the Economy, essential characteristics of teachers in high performing educational systems have been identified.

Selection, Specialization, Initial Teacher Education, and Ongoing Professional Development are obviously steps prior to tenure. Marc Tucker, president of the National Center on Education and the Economy (NCEE), states, "We are mainly recruiting teacher candidates from the bottom half of the kids who go to college...." Perhaps, not surprisingly, teachers in K-12 only undergo the selection process at the tenure granting stage. The situation in the Philippines is likewise similar. There are tests required for entry into public school teaching but not so much occurs at the training or preparation stages. With weak standards for acquiring tenure, it is therefore no surprise that the teaching profession in the Philippines even in higher education is sorely lacking in quality.