Scores Up but Gaps Remain in DC Public Schools

July 29, 2016
"In every chain of reasoning, the evidence of the last conclusion can be no greater than that of the weakest link of the chain, whatever may be the strength of the rest," Thomas Reid wrote in the book Essays on the Intellectual Powers of Man. This year, the OECD published a study entitled Low-Performing Students: Why They Fall Behind and How To Help Them Succeed. In its release, it had the headline, "Helping the weakest students essential for society and the economy". Averages can hide reality. Average scores may be rising, but a true measure of schools' effectiveness is the performance of its weakest. Scores in the US national exams are indeed up for the District of Columbia (DC), but examining these scores in greater detail show that schools are still failing disadvantaged students.

Blagg and Chingos have looked closely at the scores of schools in DC and have debunked the claim that the improvement is due to a decreasing number of black children attending the schools.

The projected change based on demographic change, shown above in blue, fails to match the observed improvement in scores. The projection takes into account the fact that the proportion of white students in DC public schools has nearly doubled within the past ten years. Of course, this is an average. Schools near Capitol Hill have seen a larger increase.

In Capitol Hill, the proportion of white to black students has not just doubled but has increased by a factor of 6. In addition, dealing with how scores are affected by student groups is not really that straightforward since there are peer effects.

What maybe particularly useful is to look at how schools are performing with family income in mind. Blagg and Chingos decided not to factor this in their analysis since they question the validity of free or reduced lunch as a socio-economic indicator. This perhaps is reasonable since Blagg and Chingos are examining gentrification thus it matters whether such indicator has been consistent during the past ten years.

Using eligibility for free or reduced lunch as a measure of family income may indeed be not as accurate as one hopes, but the following numbers (percent at basic level NAEP reading test) show where the improvement in scores is really occurring:

The rise in NAEP reading scores comes mainly from students who are not eligible for reduced or free lunch. Children from poor children are still failing even to meet the basic level of reading. Looking at gentrification simply takes our eyes off the real deal. Schools are still failing to address the needs of the weakest students.

Towards the goal of finding ways to understand the weakest students - the OECD has found some factors that correlate with the number of lower performing students. 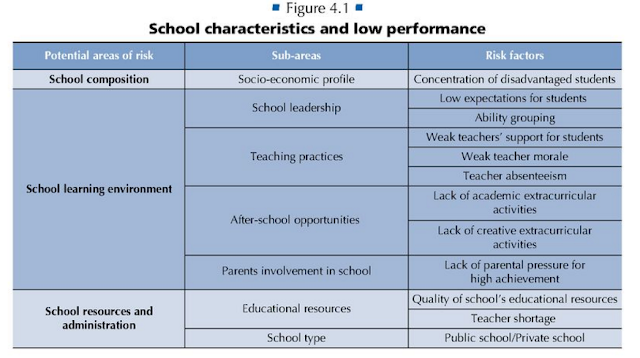 With the above in mind, the OECD has the following recommendations:

It is therefore not surprising that DC schools have not really progressed that much. Past reforms have not focused on the real problems....