In High School Science, Students Are Somewhat Engaged But Not Challenged

March 22, 2016
Whenever I mention chemistry to other adults, most would remark on how difficult the subject was during their college years. Yet, in arguments that often require scientific thinking, adults would often exhibit remarkable confidence in their thinking. Equally astonishing is that the views, taken by the public on issues that involve science, are not as strongly correlated as one might predict with their level of education. This is one of the findings made by the Pew Research Center. 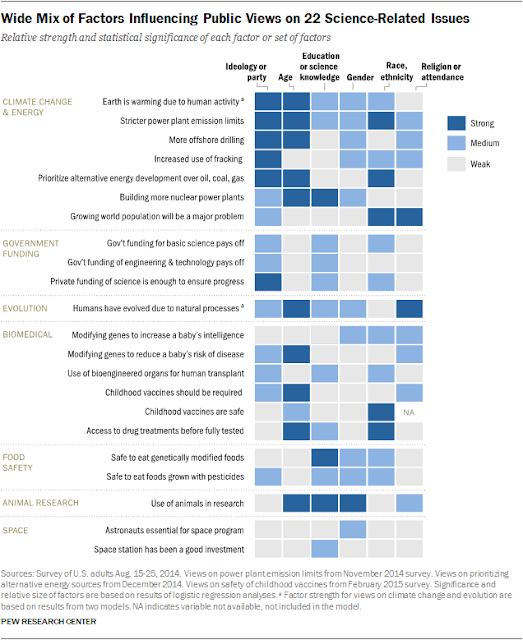 Perceiving oneself as knowledgeable in science may actually be more widespread , in stark contrast to the common notion that chemistry is a scary subject. In fact, a recent study shows that students in high school generally do not feel that science subjects are challenging. Scheduled to appear in the Journal of Educational Psychology, a team of researchers surveyed more than 200 high school students and monitored their science classrooms to measure students' engagement and perception of challenge, as well as instructional support or obstruction from teachers. The results are shown in the following graphs (These are drawn based on the data provided in Perceived Challenge, Teacher Support, and Teacher Obstruction as Predictors of Student Engagement. Strati, Anna D.; Schmidt, Jennifer A.; Maier, Kimberly S. Journal of Educational Psychology, Mar 3 , 2016. http://dx.doi.org/10.1037/edu0000108):


The paper also looks at how much teachers either support or obstruct science learning, in both instrumental and emotional dimensions. Providing a scaffold and well-organized presentations are examples of instrumental support while the opposite, lack of learning resources typifies instrumental obstruction. On the emotional side, motivating a student is supportive while the use of sarcasm is obstructing. Here are the findings which show that teachers are generally supportive:


The paper aims to find correlations between engagement, challenge, support and obstruction. Unfortunately, there is an "elephant in the room". Students do not feel challenged in their high school science classes. With a low level of challenge, any correlation found does not carry too much weight. What the teacher does, supporting or obstructing, should not really matter too much. An important question obviously needs to be addressed. Do the students feel unchallenged because teachers have lowered the bar in these science classes? This is what the authors of the paper think.

However, I have a slightly different take. The degree of challenge reported here is what a student perceives. Seeing that there are so many adults who are likewise so confident in their scientific knowledge, perhaps it is the perception that is wrong.