Body and Soul, Science and Religion

March 24, 2016
It was Holy Wednesday and here I was, giving a talk on antimalarial drugs at American University. In fact, I once gave a talk at the College of William and Mary on a Good Friday. This was certainly different from my experience growing up in the Philippines. Schools were closed during these days. Even the television made sure everyone felt that it was Holy Week. 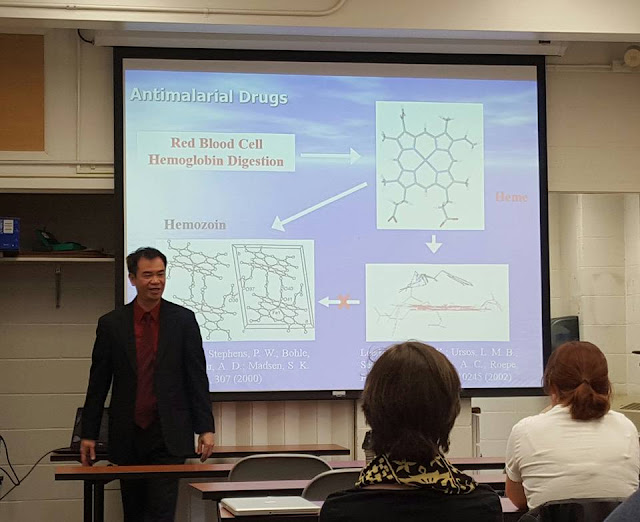 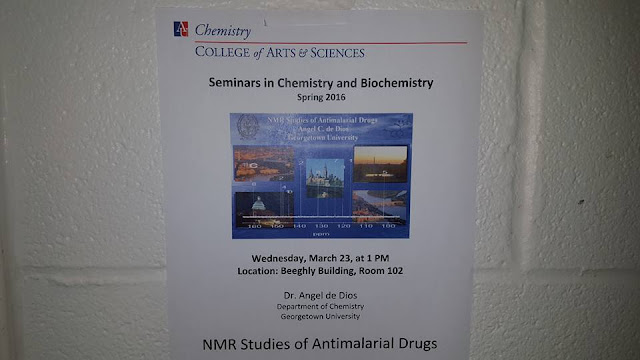 The Christian faith does exert great influence on Philippine society. In some ways, this influence could be good especially if encourages people to pause and reflect. Unfortunately, religion at times can be used by people to impose on others what they think is good and right. In "Christians in Philippines Self-Flagellate in Bloody Holy Week Ritual", the Huffington Post writes:


Hundreds of barefoot Filipinos marched on roads, carrying heavy wooden crosses and whipping their backs until they bled on Thursday in an annual gory religious ritual as the mainly Catholic Philippines observed near the end of the Lenten season.

Many Filipino devotees perform religious penance during the week leading up to Easter Sunday as a form of worship and supplication, a practice discouraged by Catholic bishops, but widely believed by devotees to cleanse sins, cure illness and even grant wishes.

The Catholic faith can therefore assume a different form and substance, one that can even stray from the prescribed teachings of the Roman Catholic Church. It is therefore not surprising to see this sad and misguided influence even in basic education. The following is an example.

The photos below were copied from a Facebook post by Michael de Lara on the group called Filipino Freethinkers. 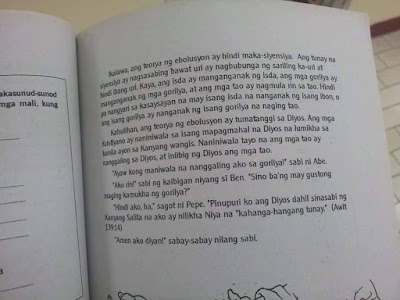 The above text is written in Filipino. Below is the English translation:

Lastly, the theory of evolution does not deny the existence of God. Christians believe that a loving God created according to His image. We believe that humans came from God and that God loves humans.

"I do not want to believe that I came from a gorilla", said Abe.

"Me, too", said his friend, Ben. "Who among us would prefer to be considered as a gorilla look-alike".

"Not me", answered Pepe. "I praise God because His Word says that I was wonderfully created by God (Psalms 139:14).

"Amen to that", everyone said in unison.

The very first sentence that states that evolution is not scientific goes in stark contrast with what Pope John Paul II stated in his Message to the Pontifical Academy of Sciences: On Evolution.


Today, more than a half-century after the appearance of that encyclical, some new findings lead us toward the recognition of evolution as more than an hypothesis.

Pope John Paul II in the above sentence was referring to the encyclical Humani Generis authored by Pope Pius XII in 1950 which said,


For these reasons the Teaching Authority of the Church does not forbid that, in conformity with the present state of human sciences and sacred theology, research and discussions, on the part of men experienced in both fields, take place with regard to the doctrine of evolution, in as far as it inquires into the origin of the human body as coming from pre-existent and living matter - for the Catholic faith obliges us to hold that souls are immediately created by God.


“When we read in Genesis the account of Creation, we risk imagining God as a magician, with a wand able to make everything. But it is not so.”

The textbook shown above is clearly in error not only in science, but also with regard to the official teachings of the Roman Catholic Church, yet it stays and continues to teach the wrong things to Philippine children.