Unified Petitioners Against K to 12

November 10, 2015
The following is a press release from the Unified Petitioners Against K to 12 in the Philippines:

Anti-K to 12 rally on Friday the 13th:
Opening Salvo for anti-APEC actions in PH

The Unified Petitioners Against K to 12 (UPAK), a group formed by at least seven blocs that filed K to 12-related petitions at the Supreme Court, vowed to bring thousands of students, teachers, parents and concerned citizens together in a national rally against K to 12, to be held at the Supreme Court on November 13, as an opening salvo for further anti-APEC mobilizations in the country.

In a statement, UPAK labeled K to 12 as a “curriculum that does not fit the needs of the Philippines, imposed by First World-dominated multilateral organizations such as APEC and the World Bank, entities that usually serve the needs of industrialized countries only while perpetuating poverty and lack of development in developing nations like the Philippines.”

Pointing out that the poorest APEC-member country – Papua New Guinea – has been K to 12-compliant for years now, UPAK notes that “there’s no guarantee that adopting K to 12 will lift the Philippines from poverty.”

Thousands of students, teachers, parents, and concerned citizens from groups such as the Alliance of Concerned Teachers (ACT), Manila Science High School, Alyansa ng Mga Tagapagtanggol ng Wikang Filipino (TANGGOL WIKA), Council of Teachers and Staff of Colleges and Universities of the Philippines (COTESCUP), Suspend K to 12 Coalition, Parents’ Advocacy for Children’s Education (PACE), ACT Teachers Partylist, Makabayan Coalition, and Suspend K to 12 Alliance are set to join marches from Plaza Salamanca (at 2pm) and Manila Science High School (at 3pm) towards the Supreme Court grounds, to call upon the high court to swiftly resolve the consolidated seven (7) K to 12-related petitions.

The program will start at 3:30 pm at the Supreme Court grounds at Padre Faura, Manila.

“We want the K to 12 scheme to be declared unconstitutional because it violates the people’s right to free secondary education, teachers’ right to stable employment, workers’ and indigenous peoples’ communities’ rights to be consulted on matters affecting their interests,” said UPAK in a statement.

Furthermore, UPAK emphasized that “K to 12’s curriculum has abolished Philippine History in high school, and it also eliminated other vital subjects such as Filipino language, Literature and Philippine Government & Constitution in college. Thus, the very essence of K to 12 goes against the country’s needs and the people’s welfare. It must be also noted that far from deepening the skills of students, K to 12 has actually diluted the curriculum of science high schools in the country. Moreover, around 100,000 teachers and education sector employees may lose their jobs or have their salaries reduced because of K to 12.”

UPAK vows to “mobilize people power against this anti-student, anti-teacher, anti-worker, and anti-Filipino K to 12 program, until it is finally declared unconstitutional and junked by the Supreme Court.” ###
‪#‎UPAK‬ ‪#‎PHFightAPEC‬ ‪#‎APECtado‬ 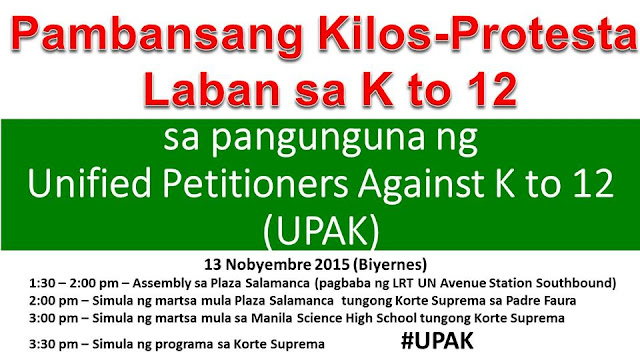