November 11, 2015
Arithmetic is one of the basic subjects in elementary school. Students need to learn what it means when something doubles. Yet, the Philippine government is the first to teach wrong arithmetic. The government claims that teachers' salaries are going to double when in fact this is a gross misrepresentation.

The following is a screenshot of an official release from the Philippine government:


The title is clear but if one reads the article, the first sentence tells a different story: "Public school teachers and nurses will be paid twice more compared to their private counterparts...." Salaries are therefore not doubling.

Misinformation, however, is not the only big mistake the government is making in the Salary Standardization Law (SSL) of 2015. One glaring error is how the government equates delivery of basic education and health care to a private enterprise. With this perspective, the government then justifies raising the salaries of mid-level and executives. As a result, the Inquirer reports:

To appreciate the great disparity in the numbers above, the Alliance of Concerned Teachers (ACT) in the Philippines has provided the following graph: 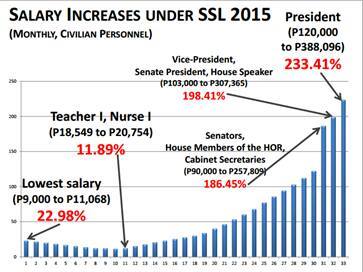 Considering public basic education as no different from a private company treats teachers as no different from factory workers. Public basic education is not a factory. A manager or supervisor can make a significant difference in the productivity of a company. A chief executive can cut production lines that are not bringing profits. A manager can select starting materials. The situation inside a public school classroom is nowhere similar from a factory. Teachers are on the front line. The teacher is one of the biggest factors in learning outcomes. Those in the mid-level, the bureaucrats, hardly have any influence on whether students are learning or not. More importantly, what a private entrepreneur is willing to pay a teacher should not be the measuring stick on how much public school teachers should be paid. Instead, what the teacher really needs to function fully should be the standard. If the government aspires for international standards in the curriculum, the government must then look at how much other countries are paying their public school teachers. And the following shows how teachers' salaries compare to those of other countries.

It is therefore not surprising that teachers are voicing their frustration with this salary increase. Dr. Judy Taguiwalo, ACT National Vice-Chairperson writes:

We asked for a P25,000 monthly salary for public school teachers and P16,000 minimum for government personnel. But the yellow administration decided high ranking officials should get the biggest increases. Mad does not even come close to describing how public school teachers felt upon learning they will have less than 12% increase in 4 years while the President gets more than 220% increase.