Pearson and Ayala: Profiting from DepEd's K to 12?

November 23, 2015
Teach100 collects blogs on education and among its top five sites is Alan Singer's entries on Huffington's Post. The most recent post by Singer talks about a "scary story" from the Philippines.


Singer starts his article by citing Finnish educator Pasi Sahlberg. Huffington Post has also recently shared a video on Finnish schools, highlighting their differences from schools in the United States:

Finnish schools are doing something right.Video: Fatherly
Posted by The Huffington Post on Wednesday, November 18, 2015


Another glaring difference is the inability of the Philippine government to provide basic education to all. There are no private schools for basic education in Finland. On the other hand, the Philippine government encourages participation of the private sector through its Government Assistance for Students and Teachers in Private Education (GASTPE) program. 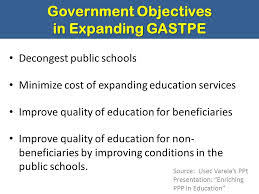 With the introduction of senior high school years in DepEd's K to 12 curriculum and the inability of the Philippine government to provide these additional years, a marketability opportunity for profit now exists. Singer's article in the Huffington Post basically distills a paper written by Curtis B. Riep of the University of Alberta, Canada for Education International. The paper entitled, Corporatised Education in the Philippines: Pearson, Ayala Corporation and the Emergence of Affordable Private Education Centers (APEC), has the following abstract:

Singer summarizes the 49-page report with the following paragraph:


Riep documents a looming educational crisis in the Philippines and highlights a government that ignores its responsibilities. Currently, hundreds of thousands of Filipino youth remain out of secondary school. APEC claims it will provide a low cost solution and make money at the same time by using cost-cutting measures such as placing classrooms in office buildings instead of schools and hiring an under-qualified non-accredited low-paid teaching staff. Pearson and Ayala will invest about $8.5 million between 2013 and 2018 to set up 50 low-cost private high schools.

Riep also provides photographs that describe in so many words what these Affordable Private Education Centers really are. One of these photographs is shown here. These classrooms are rented spaces from abandoned commercial buildings.

Singer connects what Pearson and Ayala are doing in Philippine Basic Education to what Sahlberg calls Global Educational Reform Movement (GERM). The acronym is appropriate because this education business model is really a plague.