NAEP Scores and Students with Disabilities

November 01, 2015
The US Nation's Report Card is out. The NAEP exam taken by a nationally representative group of about 600000 students stands out from other standardized exams because the test is not high stakes. Since NAEP scores are not available at neither school nor individual level there is no incentive to prepare students for this exam. Students in classrooms can not be prepared or drilled for this test. Seeing scores that are generally flat for nearly a decade therefore says a lot with regard to recent efforts in improving basic education in the United States. The percentage of students passing basic, proficient and advanced levels has remained practically constant throughout the past decade. The following, for instance, shows the percentage of students scoring below basic (orange), at basic (light green), at proficient (green), and at an advanced (dark green) level in grade 4 and 8 math. 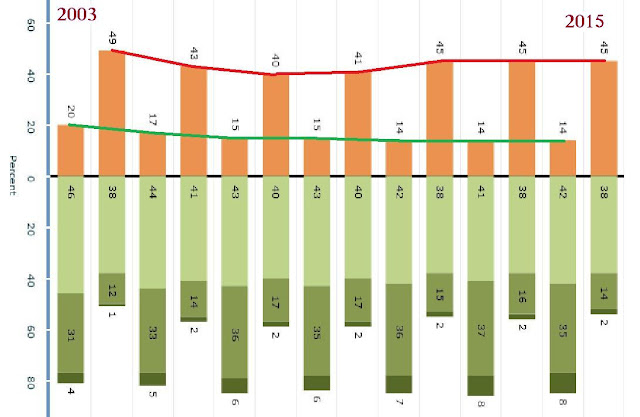 The Advocacy Institute however points out another set of data that requires our attention to interpret the above results in a better light. Since 2003, the percentage of students with disabilities being excluded from the NAEP exam has been going down.