The Language(s) Children and Teachers Use in Their Classroom

August 31, 2015
Results from schools in Houston suggest that bilingual education is producing better learning outcomes. What works, however, requires a thoughtful consideration. The scheme that leads apparently not just to higher scores in language tests, but also in mathematics, is a specific bilingual program called "two-way" dual language. Instruction under this program has the option of either starting with either an 80:20 or a 50:50 model. In the 80:20 model, instruction is given in the mother tongue of the English language learners (ELL) eighty percent of the time and in English, during the remaining time. The amount of instruction in English increases progressively and reaches 50:50 in third grade, which continues until fifth grade, the end of the program. In the 50:50 model, half of the instruction is in English and the other half is in the mother tongue throughout all six years, from kindergarten to fifth grade. What makes this dual language program in Houston unique is its "two-way"nature. This program combines both ELL and native English speakers into one classroom.

The "two-way" dual program along with other bilingual programs like transitional (Students are taught in their native language during the primary grades and gradually increasing instruction in the second language) and "one-way" dual language (This is similar to "two way" dual language except all the students in the classroom are English language learners) has been in place since 2007 so there is now ample data for evaluation. A parent can waive enrollment in any of these programs so there are likewise English language learners (ELL) who have gone through English-only instruction as well as students who have exited the program before fifth grade. Following a cohort of ELL kindergarteners from 2007–08 through 2012–13, Sandra Alvear of the Houston Education Research Consortium (HERC) has compiled a research brief presenting reading test outcomes for these students. The results are summarized in the following figure: 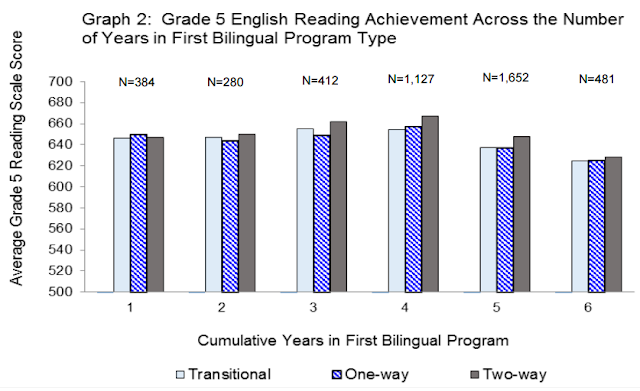 First, from the number of students in each number of cumulative years, it is clear that most students exit the program before fifth grade. Most students do stay until third and fourth grades. And these students perform best regardless of the type of bilingual program. Students whose parents opted not to place their child in any bilingual program are not included in the above graph. These "English immersion" students generally perform better than students who only participated in one year in a bilingual program. This difference however disappears with additional years (3-4 years) and those in the "two-way" dual language program even perform better than those taught only in English. Three to four years in the "two-way" dual language program prove superior to other groups.

The difference between "two-way" and "one-way" dual programs is intriguing. One should take note that these two are the same, curriculum-wise. These only differ in "two-way" programs having native English speakers in the classroom. It is likewise important to note the above graph already controls for gender and socio-economic status. As in other studies, poverty is correlated with lower scores and girls perform better in reading tests. Finally, there is a price tag associated with the "two-way" dual language program. It is not cheap. HERC director  Ruth N. López Turley says, “They’re harder to staff. You need to have fully bilingual teachers. You need to have fully bilingual materials. Everything costs more.”