Teaching Mathematics: All at Once or One at a Time?

August 07, 2015
Teaching students how to approach and solve a problem in mathematics now recognizes the importance of procedural flexibility. This objective has been sometimes translated to requiring students to formulate more than one solution to a math problem. The ability to compare different strategies aimed at developing a deeper and more transferable learning is often confused with the ability to create multiple strategies. These two abilities are clearly different cognitively and pedagogically. As a result, the original objective of developing the skill of evaluating strategies is often not met. Unfortunately, even with the right approach of providing students multiple strategies to compare, the actual mode of delivery remains important. A research article scheduled to be published in the Journal of Educational Psychology shows this through a well-designed experiment. 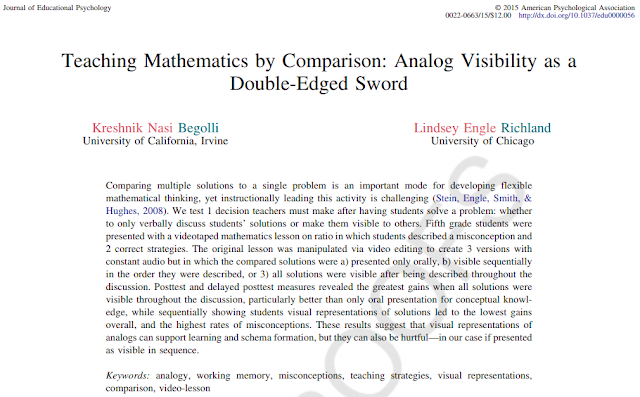 In the study, students have been randomly assigned to the above three experimental conditions. The specific lesson taught and assessed deals with proportional reasoning. This is demonstrated in the first problem covered in the lesson:

The number of free throw shots attempted and made are shown for two players, Ken and Yoko, in a basketball game. Ken attempted 20 and made 12 while Yoko tried 25 times and made 16. The question is: Who is a better free throw shooter based on this record? Three solutions are presented. One of these is incorrect while the other two provides the right answer.


The above are the three different solutions presented under three different experimental conditions to the students. The solutions are then shown to the students in the above order, starting with the wrong solution and ending with the best. The results are quite remarkable as shown in posttests that assess procedural knowledge, procedural flexibility, and conceptual knowledge. Procedural knowledge measures a student's ability to solve problems that are similar to those covered in the lesson. Procedural flexibility measures a student's ability to generate more than one correct solution, compare two strategies, and evaluate the correctness of a novel strategy. Conceptual knowledge assesses a student's implicit and explicit knowledge of the lesson taught. Thus, in this particular lesson, students have been tested on how deep and how well they understand the concept of ratio. The results are shown in the following graph:

Visual aids are meant to aid learning, but the above results show that the presentation without visual aids is even superior to the one that uses sequential visual aids, the presentation in which visual aid is provided only for the solution being discussed. Recalling that the order of the presentation starts with an incorrect solution suggests that students can learn misconceptions quite well. Since this is the first item shown to the students, it appears that it occupies and uses up a child's limited working memory. On the other hand, when all solutions are always visible, there is no required storage of the image in a child's memory. Comparison can thus be made without relying so much on how well a child remembers previous images. Effective learning therefore requires maximizing a child's cognitive resources which can be achieved by allowing the child to focus both executive function and working memory on the real objective of the math lesson. If a child is expected to learn how to evaluate and compare strategies, it is helpful to have the strategies to be compared visible so that a child can actually focus on comparing and not spend limited cognitive resources on other efforts such as storage and recall. It should likewise be obvious that the cognitive demands are far worse if a child is asked to produce multiple strategies on his or her own as a learning activity for both procedural knowledge and flexibility.