Are You Good at Math?

August 11, 2015
When I was growing up, I often heard from others the belief that individuals who excel in mathematics are likely to be good in playing chess or music. I did play chess when I was an adolescent but I never won a game against one of my uncles, who was considered as a decent chess player. When it came to music, I only started playing the guitar after college. Numerous attempts before then were unsuccessful, but I did learn calculus when I was fifteen years old.


Performance in mathematics can be assessed in various ways. Even before calculus or algebra, there exists an array of measures that can help characterize a child's mathematical ability.

The above are examples of assessments that may help answer the question, "Are you good at math?"

A set of these tests have been administered to more than 200 pairs of twins in the state of Ohio to examine relationships between these math achievements as well as familial influences on math abilities. In addition, the twins are also asked to to fill out the Revised Math Anxiety Rating Scale. The study, scheduled to be published in the Journal of Educational Psychology, finds that the children can be categorized into five different groups:

Classes 1, 2 and 3 are obviously a lot smaller than Classes 4 and 5. Only 3.5 percent (18 out of 508) are at the bottom. Class 2, also very small, shows that some children can be good at the dots task but are not proficient in calculation, word problems, and the number-line task. Class 3, on the other hand, demonstrates a group of students who are good on the number-line task only. Most of the students fall under either Class 4 or 5. Those considered to be in Class 4 are students who perform well across the board. Class 5, on the other hand, seems to be composed of students who are decent in making estimates (dots task and number-line), but do not do well in either arithmetic or word problems. One huge difference between the students in these two classes is the level of math anxiety. Students in class 5 are very anxious about math. Since this study involves twins, one can examine whether twins are found within the same class. In this regard, only class 4 exhibits a high chance of finding both twins in that class.

One observation that may be drawn by comparing classes 4 and 5, which encompass almost ninety percent of the children in this study, is that the level of anxiety is inversely related to achievement in math. This study only provides a correlation and does not establish a causal relationship between anxiety and performance. It is not known whether anxiety causes low performance or low performance leads to greater anxiety. This is very likely a two-way relationship. The researchers, however, write "Child specific environment influences are implicated": 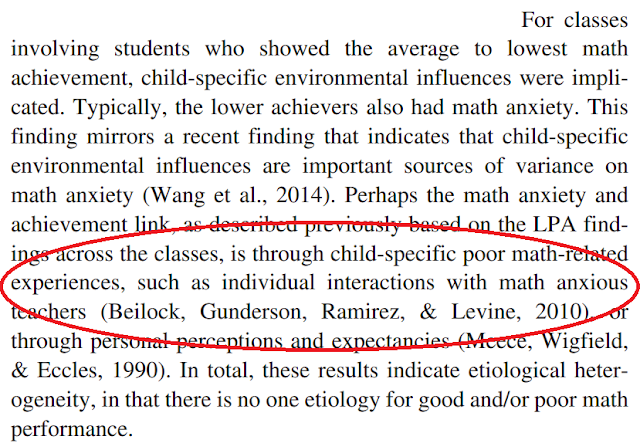 Am I good at math? I guess my answer is: I had teachers in elementary and high school who were confident in math....