Are You a Quill or a Crayon? Differentiated Instruction in an Elementary School

December 12, 2014
At first glance, recognizing that "one size does not fit all" seems to be quite an attractive preamble to education. Addressing the students' needs, abilities, interests and preferences does seem reasonable in basic education. Thus, in an academically diverse classroom, it may sound logical to group students. It sounds logical until one watches a particular episode of Clarence, the one entitled Average Jeff. In that episode, an assessment was made in order to group students. The two groups are called quill and crayon. If a student is deemed a quill, that student ends up with a group of students shown below: 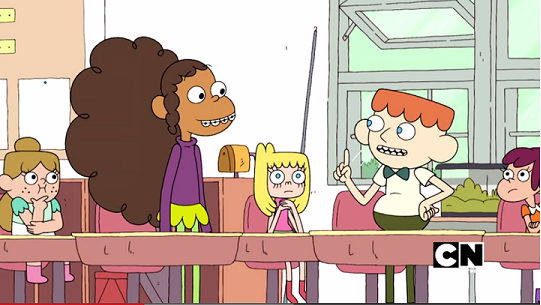 If the student gets labeled as a crayon, that student lands in a classroom like the one shown below: 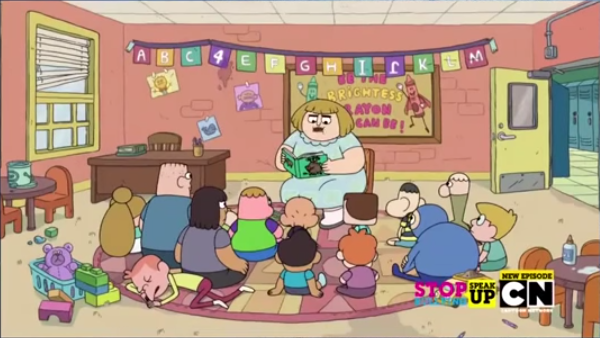 The quills receive higher quality instruction and greater opportunities while the crayons do not. Of course, opposition to differentiated instruction can not be purely based on a cartoon like Clarence. It is only research that can really settle this issue. There are previous studies summarizing the research in this area authored by Slavin of Johns Hopkins University. One is for elementary schools while the other is for secondary schools. Both are quite old (at least twenty years ago) and evidence supporting ability grouping is very weak. There is, however, one recent research paper (October 2014) in this area published in the journal Gifted Child. The paper authored by a team of education researchers from University of Connecticut, Allegheny College, Ball State University, and Colorado State University, has the following abstract:

Despite the potential of differentiated curricula to enhance learning, limited research exists that documents their impact on Grade 3 students of all ability levels. To determine if there was a difference in achievement between students involved in 16 weeks of predifferentiated, enriched mathematics curricula and students using their district’s curricula, we conducted a multisite cluster-randomized control trial with 43 schools in 12 states. A series of three-level models, using pre- and postachievement test data, failed to show a main effect for treatment, but the results suggested a treatment by achievement-level interaction that was moderated by the achievement level of the school. As a result, the highest achieving students in the lower achieving schools seemed to receive the greatest benefit from the treatment curricula. An analysis of researcher-developed unit tests revealed that treatment students successfully learned and applied the curricula’s challenging mathematics. Thus, using the predifferentiated and enriched mathematics curricula with heterogeneous ability students appeared to “do no harm”—students who completed the treatment curricula did as well as their control counterparts, on average. Evidence of its achievement-related benefits is more ambiguous; however, the findings do suggest some benefits for the highest achieving students in lower achieving schools.

The following table illustrates how much differentiated instruction differs from the traditional method in terms of learning outcome as measured by a post test: 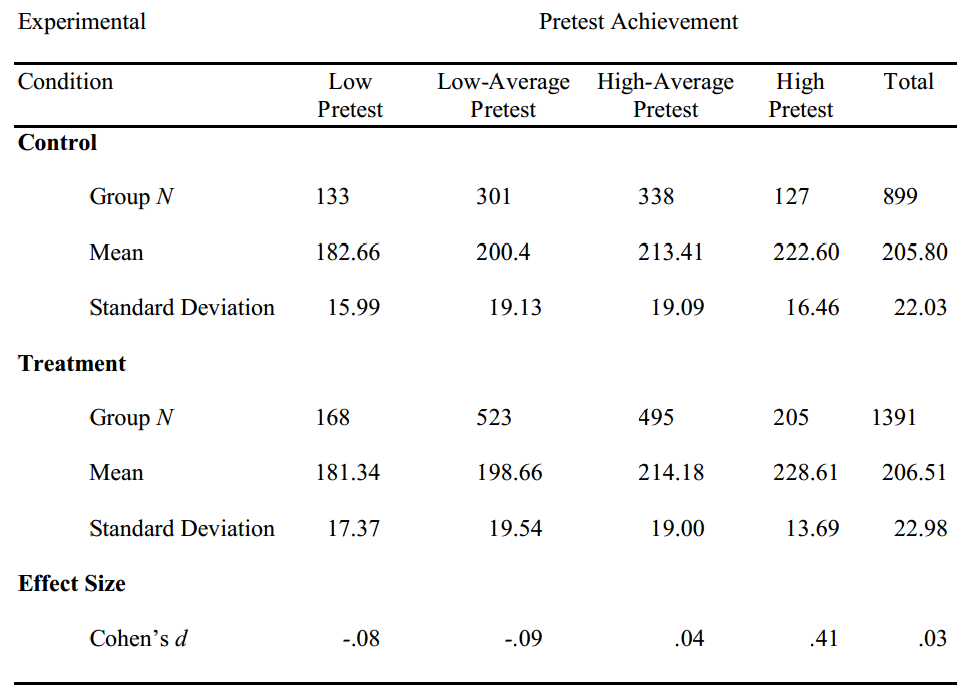 The above shows how students have been grouped according to an initial assessment or pretest. These students have been divided randomly into two groups - one group receives differentiated instruction (Treatment) and and the other group stays with a traditional mode of instruction (Control). The differences across all groups are really quite small. In fact, for students who are deemed challenged at the beginning, those in the control group score a bit higher than those in the treatment group.

The results of the above study although much more recent are in fact not significantly different from what Slavin found more than twenty years ago. At least, it is comforting that differentiated instruction apparently does no harm. One must keep in mind, however, that these studies are controlled such that quality in instruction is not different between the two. In addition, "Does no harm" unfortunately does not take into account opportunity loss. It is useful to reiterate here what was mentioned previously in another post in this blog. It was a citation from a work by Rohrer and Pashler (Rohrer, D. and Pashler, H. (2012), Learning styles: where’s the evidence?. Medical Education, 46: 634–635. doi: 10.1111/j.1365-2923.2012.04273.x):
Rohrer and Pashler concluded,

"In summary, there presently is no empirical justification for tailoring instruction to students’ supposedly different learning styles. Educators should instead focus on developing the most effective and coherent ways to present particular bodies of content, which often involve combining different forms of instruction, such as diagrams and words, in mutually reinforcing ways. Given the costs of assessing students’ supposed learning styles and offering differentiated instruction, this should come as good news to educators at all levels, from kindergarten through medical school."


Differentiated instruction demands a lot. It requires good and regular assessment tools. Having several groups in one classroom attend to different activities, projects or problems requires more in terms of classroom management. These requirements often translate to having more than one teacher in one classroom.

It is indeed true as shown by older studies as well as in the most recent study cited above that high performing students somewhat benefit from differentiated instruction. Unfortunately, this is probably due not to differentiated instruction. Oftentimes it is brought about by placing better resources (better teachers and learning materials) in front of these students.