Fighting for Filipino in College

June 17, 2014
I was a first year student at the Ateneo de Manila, enrolled in a class on Western Medieval History, and Jose S. Arcilla, S.J. was the instructor. Right at the beginning, the Jesuit warned us against using Filipino in the class. Arcilla in fact exclaimed, "I am proud to be a Bicolano." There were indeed dim moments when I was studying at the Ateneo and Arcilla's class was definitely one of the worse. Arcilla spent almost half of each lecture reciting corrections to the textbook that he authored. He spent the other half proselytising. History was part of the general education required of all students. After all, who would want a chemist who did not have the opportunity to hear and learn about Visigoths from someone who was so proud to be a Bicolano?

The next three years at the Ateneo were much more positive. During my time, a chemistry major would be required to take courses in History, Psychology, Sociology/Anthropology, Economics, Philippine Constitution, Filipino, English, Spanish, Theology and Philosophy. In each of the three summer sessions, I had to enroll in three courses in order to graduate in four years. It was certainly over 70 credit hours of General Education. I did appreciate the fact that in Philosophy and Filipino, unlike in Medieval History, I was allowed to use Filipino. While studying Philippine literature, I had the rare luck of having a substitute teacher for some time who permitted me to use Filipino. The other teacher would not have allowed me to submit essays written in Filipino. These were essays that commented on writings of Bonifacio and Jacinto and I thought it was only appropriate that I wrote them in the same language. Taking 16 credits of Philosophy in Filipino was also a great experience as I saw in my own eyes how the ideas of Kant, Buber, Thomas of Aquinas could be discussed in my mother tongue.

With the dramatic changes in Philippine basic education and the fact that these revisions actually target higher education, it is not surprising to see that the new K+12 curriculum carries significant consequences on the college curriculum. Faculty at colleges, for instance, are now voicing their opinion against the exclusion of Filipino in General Education:

The memorandum from the Commission on Higher Education (CHED) in question is No. 20 series of 2013, which defines the General Education curriculum for 2018 (not 2016, as erroneously reported in the above article). By 2018, students entering college would have gone through the 2 additional years of high school. The academic track of these additional years is included in the memo and is shown below: 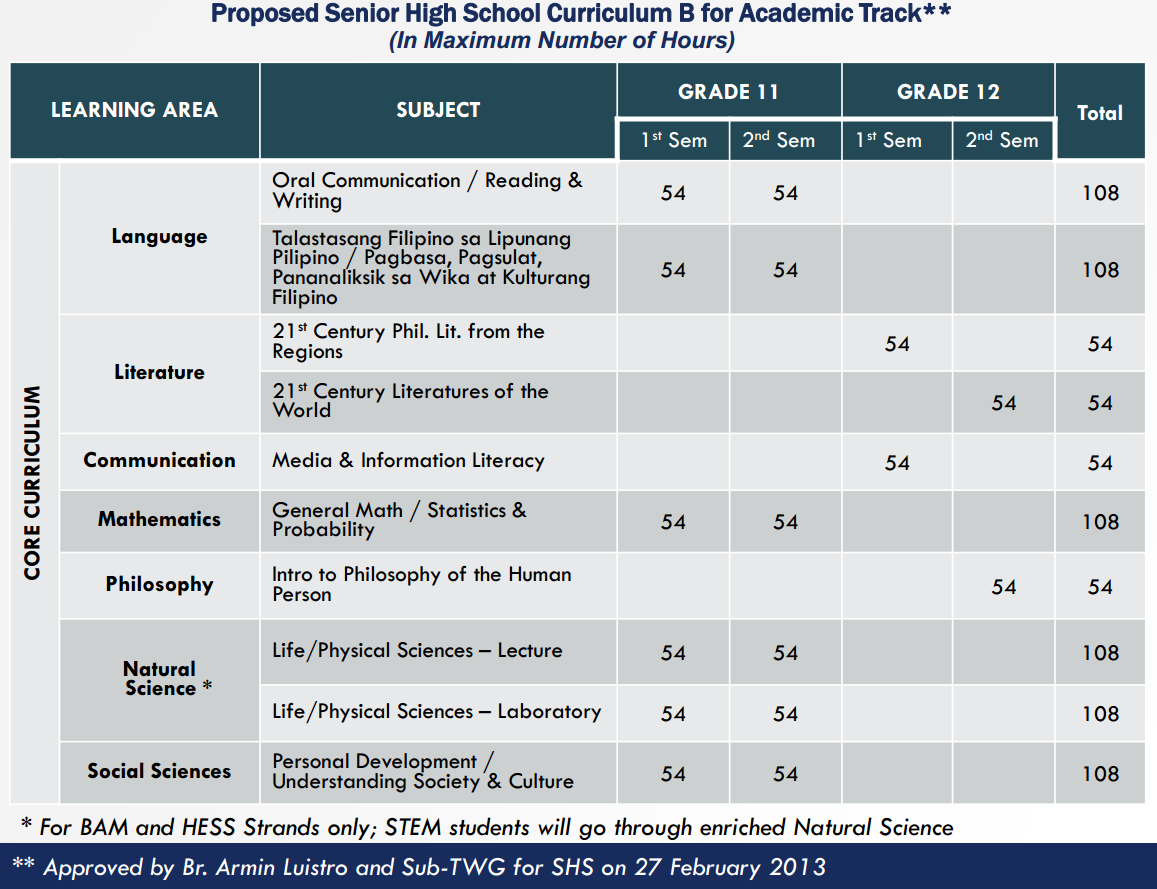 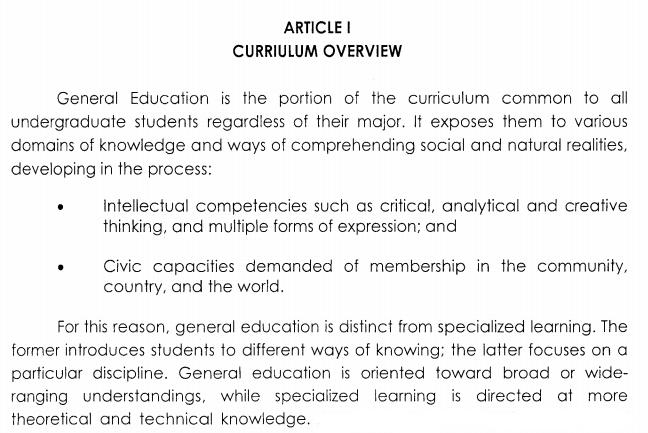 Soon after I finished college, Spanish was no longer a required subject in college. That happened quite late for me. Obviously, when a course in college is dropped, it can have an impact on its instructors. However, the continuing employment of instructors is never a justification for requiring a course in college. The fact that Spanish instructors stand to lose their jobs is irrelevant to the question of whether Spanish must remain as a required General Education subject in higher education. Of course, Spanish can always remain as an optional General Education course.

The same therefore applies to Filipino courses in colleges. Lifting the Filipino language into the academic realm does require its presence in higher education. In fact, this is true for all the languages currently spoken in the Philippines. This, however, does not mean that all languages spoken in the Philippines should be required subjects in colleges. This is not only impossible, but also a huge waste of resources and time. No one would ever finish college.

The job of higher education at least for now is to ensure that such opportunities exist. The truth is that nurturing a language is not something that can come from a decree. Intellectuals choose their medium. They make their choice based on several reasons. Universities must keep this choice free. Scholarly work is required at higher education. Instructors who do not advance their field do not belong to higher education. Keeping them does only great injustice and harm to the language.