February 25, 2014
There seems to be a disconnect between science and what is popular. Nicholas Kristof writes in the New York Times, "Some of the smartest thinkers on problems at home and around the world are university professors, but most of them just don’t matter in today’s great debates." It is ironic when a great number of issues and challenges the world currently faces require a science perspective, scientists are deemed irrelevant. The perceived chasm between what is discussed inside the classroom and what happens in the "real world" perhaps originates from the fact that it is usually not straightforward to abstract. This definitely brings back memories on how a lot of people during my childhood thought that all I knew was from "books", implying that I virtually had no practical value.

Along this line, it is not surprising to see a great need to engage students in science. The popular notion seems to be working against science education. Popular media as well as social networking have had greater impact on how the public should think. In the Philippines, a major television news outlet broadcasts a case of "flesh-eating" curse in the province of Pangasinan:

The above spread very quickly especially on Facebook and a past prophecy made by Sadhu Sundar Selvaraj claiming that such an illness will originate and spread from Pangasinan became an "instant hit". What is popular in the real world is usually not vetted properly. A science education is supposed to help the public develop not just critical thinking skills, but also the ability to recognize which sources of information are reliable. "Says who?" apparently was the most common comment made by SciJourner managing editor Alan Newman to articles submitted by students, according to a recent paper published in the Journal of Research in Science Teaching (Polman, J. L. and Hope, J. M.G. (2014), Science news stories as boundary objects affecting engagement with science. J. Res. Sci. Teach., 51: 315–341. doi: 10.1002/tea.21144).

SciJourner is a science literacy project from the University of Missouri at St. Louis. SciJourner basically provides an opportunity for teenagers (middle and high school students) to write and publish news articles. In order for an article to be accepted for publication, the following must be met:
The following is among the recent articles:

Written by Sarah Gebken; St. Joseph’s Academy (St. Louis, MO)
Tags: Health and Medicine
When I was younger, I had my ears pierced. I remember being so excited because I’d get to wear earrings like my grandmother did. A few weeks after, my ears still had not healed. In fact, they were worse than when I had first gotten them pierced. My earlobes were turning purple and hurting badly. I did everything I was told to do to keep them clean and healthy, but they were not getting better. My mother took me to the doctor, who found out that I’m allergic to nickel. This means that I cannot wear jewelry with any kind of nickel alloy. 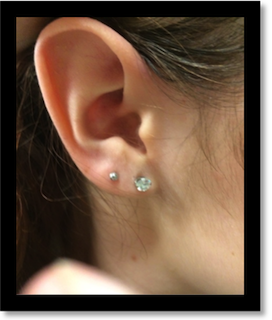 Jewelry, especially earrings, can affect those with nickel allergies. Photo Credit: Sarah Gebken.
My allergy is fairly mild compared to other people. MeredithWestrich, a student at a St. Louis County high school that has an allergy to nickel, says, “When I was younger I tried to play the flute, but I had an allergic reaction.”
According to WebMD, people with even more extreme allergies cannot eat certain foods with high nickel content, such as chocolate and fish, because they cause health problems.
The skin rash that goes with metal allergies is known as contact dermatitis, according to MayoClinic.org. This is when the skin comes into contact with nickel and breaks out into a rash, is raised, or turns a red in color where contact with the metal took place. With contact dermatitis your skin may feel itchy. It can also cause a painful burning sensation.
Sarah Stein, a faculty member at a St. Louis area high school, has experienced this with a necklace and says, “One of my eyes swelled shut and I had a rash on my face and neck for about 6 weeks.”
Also, according to MayoClinic.org, nickel allergies are the most common cause of contact dermatitis and affects about 8% of the population. The effect of nickel allergies is more common in women than in men.
Nickel allergies are on the rise. According to the National Institutes of Health (NIH), somewhere between 10–15% of Americans having an allergy to nickel, and most of that 10-15% are women. Experts are not completely sure, but they think the rise has to do with cheap jewelry having higher nickel content.
Nickel is used in many pieces of costume jewelry. Costume jewelry is cheap and easily produced with nickel. According to NIH, 31.8% of allergic reactions due to nickel happen due to the use of costume jewelry. Many costume jewelry companies use nickel so their profits will go up instead of using more expensive metals such as gold. Unfortunately, for those of us with nickel allergies, that means buying more expensive jewelry and being unsure of what contains nickel and what does not.
There are technologies out there to help those of us with nickel allergies. A sophisticated technology that is in the process of becoming an option is a nanotechnology created by scientists at Harvard in 2011. JeffreyKaup, a nanotechnology expert at Harvard’s Brigham and Women’s Hospital, and his colleagues have been working to develop a cream that could act as a barrier to nickel products. This product only uses ingredients recognized as “safe agents” unlike other nickel allergy treatments on the market today. They have tested this cream on pig skin and live mice but have not yet on human subjects. So far, the experiment results look promising.
With my nickel allergy I tend to just avoid jewelry all together. Occasionally I’ll wear a necklace or bracelet, but only for a couple hours. Recently I have had to start thinking of my class ring and worrying about what metal to get. I got the metal lustrium but I had to do a little research before I made the decision.

When asked if she would use medicines in the future to help nickel allergies, Westrich says, “I had to take medicine when I was younger, I think it was steroids, but I haven’t tried anything recently. I might try treatments again if I have another really bad reaction.” Sarah Gebken

Programs such as SciJourner can help improve scientific literacy. Unfortunately, major news outlets and social networks can easily work against these efforts.