It is common nowadays to stumble upon something that is patently false. Still, these wrong ideas capture headlines. It only shows how critical the public really is. Take, for example, the statement made by Google's senior vice president of people operations, Laszlo Bock: "G.P.A.’s are worthless as a criteria for hiring, and test scores are worthless. ... We found that they don’t predict anything." This is one of the many grossly misleading statements out there and this particular one has been recently resurrected by Thomas Friedman in his New York Times column.

Bock's conclusion can not be possibly justified by the data (Google's employees' G.P.A.'s, test scores, and performance) for one simple reason: It comes from only one company, Google. I could likewise claim that scores in the SAT or G.P.A. do not correlate with a student's performance at Georgetown University. Both, unfortunately, are misleading. Georgetown university is highly selective in its admissions that entering students often have above-average SAT scores and excellent grades in high school. Chances are high that if a student comes with not so good grades or G.P.A., the admission committee has found other ways of seeing a potential in an applicant. I would imagine that the same goes with Google. The data the Google has is already limited and if there are employees who have been hired in the past in spite of low test scores or grades, these individuals have shown in other ways that they are qualified. These are the exceptions, not the general rule. Thus, it is totally incorrect to extrapolate a general statement from a set that is too specific. Employers and colleges generally take only from a narrow swath of SAT scores. That is the main problem behind not finding a correlation.


Everything Bock says is probably not true, and if it were true, it would not work well in organizations other than Google.


Unfortunately, Willingham and this blog would not be able to stop such misinformation. It will just be a matter of time before someone sees an internet meme on social networks with a message similar to the one below: 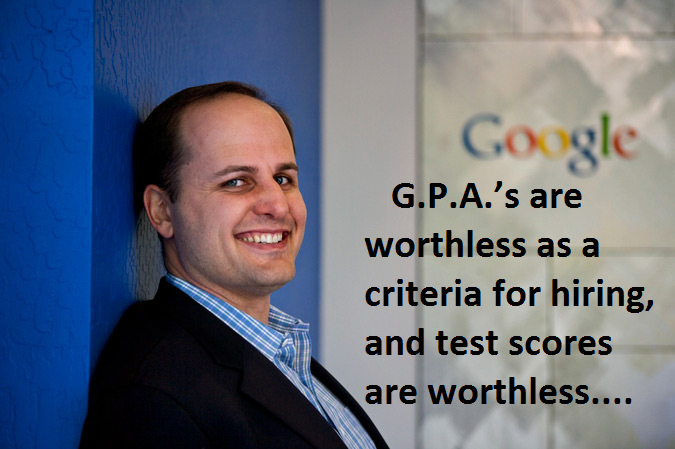