February 06, 2014
Animals seem to be able to know the difference between large and small. In battles, being outnumbered is an important piece of information. It strongly suggests that one should retreat and not fight. It likewise pays for herbivores to know where there is more food. Knowing which is more without doing exact counting is an instinct that humans share with animals. On the other hand, taking the square root of a number is perhaps exclusively human.

The instinctive ability to make estimates is called by psychologists as the "Approximate Number Sense" (ANS). It is distinct from the "Exact Number System" (ENS) which humans learn by going through school. Arithmetic, in which children learn to add, subtract, multiply and divide, involves exact counting. Arithmetic is the first step in ENS, followed by algebra, trigonometry, and later on by calculus. The relationship between ANS and ENS has been of great interest. It is even part of the "nature versus nurture" debate. Since ANS is instinctive and present even in infants, a causal relationship between these two number systems indicates that proficiency in math maybe a gift or a talent, something someone is simply endowed with at birth. There is indeed a correlation between ANS and ENS. A study published in Nature about five years ago showed that fourteen-year olds who demonstrated very good ANS were also the same students performing very well in math standardized exams from kindergarten through early high school. An individual's ANS can be gauged by visual tests such as the following (You can do this test yourself by either visiting the New York Times or Panamath): 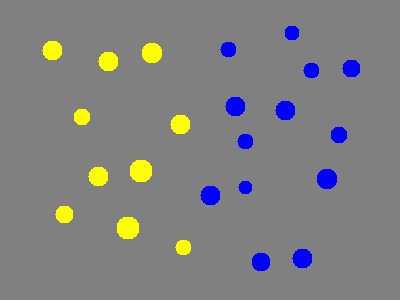 The above is shown to an individual for about 200 milliseconds (That is one fifth of a second and no one can really count that fast). It is then followed by a question: Which ones are greater, blue or yellow dots? Individuals who have very good ANS can even provide the correct answer in cases where the difference between the two is very small like nine yellow versus ten blue circles. And these same individuals have been performing very well in the past in mathematics. These findings therefore suggest a correlation between the two number systems, suggesting that some individuals are simply gifted in math.

Although a correlation is clear, a causal relationship remains unknown. Brain imaging even suggests that these two are independent. Here is an excerpt from the New York Times article stating a word of caution on this discovered correlation:


"The researchers caution that they have no idea yet how the two number systems interact. Brain imaging studies have traced the approximate number sense to a specific neural structure called the intraparietal sulcus, which also helps assess features like an object’s magnitude and distance. Symbolic math, by contrast, operates along a more widely distributed circuitry, activating many of the prefrontal regions of the brain that we associate with being human. Somewhere, local and global must be hooked up to a party line."

More recent research have revealed the following. The first, published in PLOS One, comes from researchers in UK: 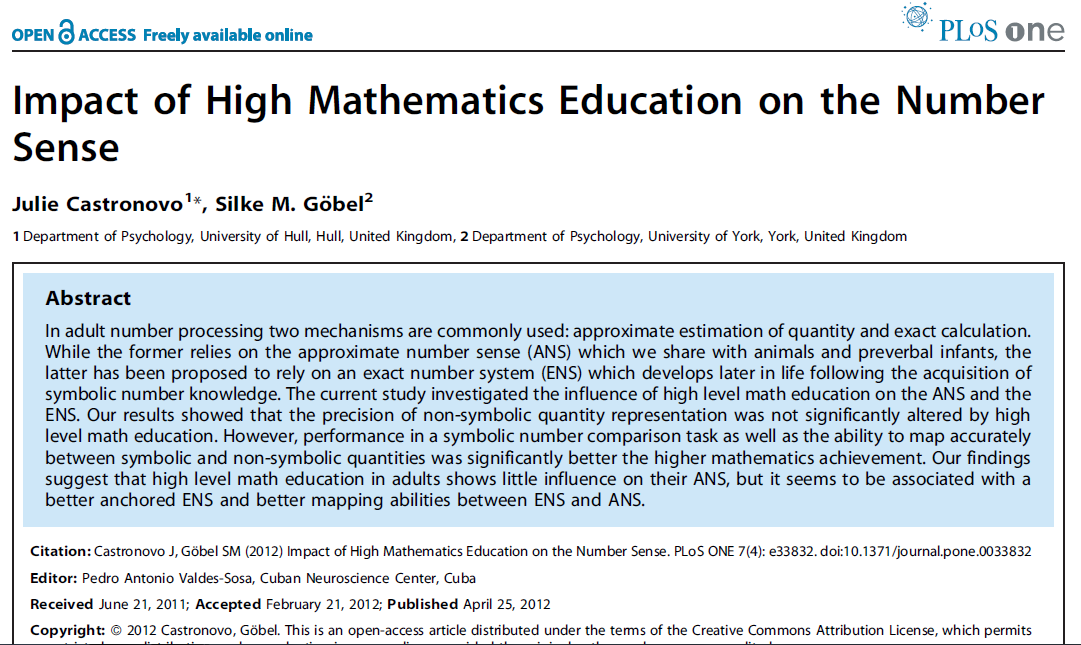 Another article, forthcoming in the journal Psychological Science, also provides further information regarding the relationship between ANS and ENS: 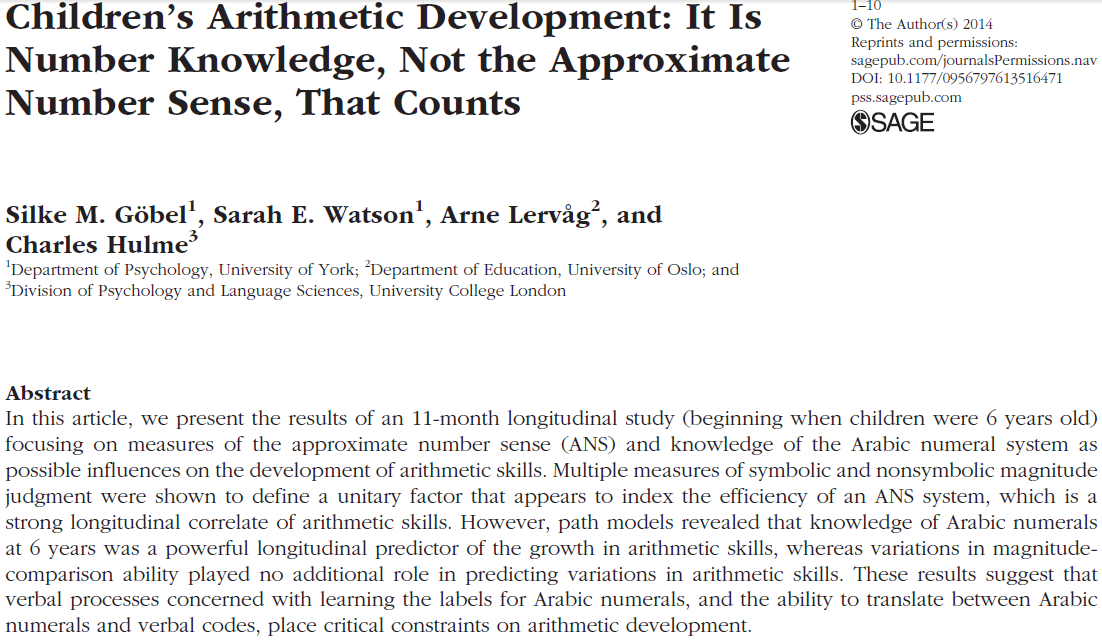 Both papers debunk the suggestion that proficiency in math is a gift at birth. These findings are more in line with what brain imaging suggests. The paper in PLOS One, however, adds a very important piece to the puzzle. The title bears this piece: Impact of High Mathematics Education on the Number Sense. Our education allows us to establish stronger links between our instincts, skills and knowledge. Being aware of this is especially important when we are trying to teach. Some teaching strategies can appear very attractive to individuals who have developed strong links between intuition and knowledge. A learner, on the other hand, does not necessarily have the circuitry yet that provides these connections. A lot of times, some teaching strategies appear very appealing to the eyes of someone who has finished high mathematics education, but in practice, fails miserably with a novice. This is true even in chemistry. There are learning materials that seem powerful when viewed by a chemist, but when viewed by students in a classroom, these materials do not have the same effect.

It is useful to trace and travel back to the past although this does not seem to be creative, innovative or forward-looking. It is not 21st century learning, but still, there are probably ways through which we teach math and these are ways that can withstand the test of time. There is no way to learn 3 + 2 = 5, other than learning that 3 + 2 = 5....