We All Must Choose Wisely

Educating children is an important obligation of society. As President Joe Biden states in his inaugural speech, "Each of us has a duty and responsibility to defend the truth and defeat the lies". Education is a choice between lies and truth. This week, this choice has been laid before us. One side talks about White Supremacy. The other talks about a "a skinny Black girl descended from slaves and raised by a single mother" who "can dream of becoming president only to find herself reciting for one". Education is about finding who we are. Education must tell us the realities of the past and the truth that we are still striving, growing and learning. We all must choose wisely. 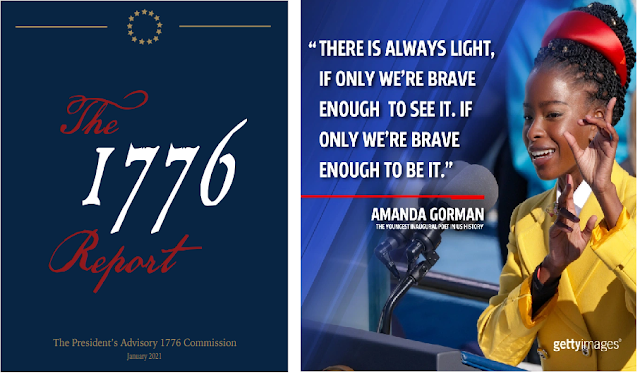 One side rewrites history while the other simply tells. The 1776 report, now rightly abandoned by President Biden, is not intended for cultivating a better education for our children. Its main purpose is to derail our path to that more perfect union we all aspire. The following excerpt from the report, for instance, continues to fail miserably in understanding and accepting what our society must do to correct the ills of the past:

"The Civil Rights Movement was almost immediately turned to programs that ran counter to the lofty ideals of the founders. The ideas that drove this change had been growing in America for decades, and they distorted many areas of policy in the half century that followed. Among the distortions was the abandonment of nondiscrimination and equal opportunity in favor of “group rights” not unlike those advanced by Calhoun and his followers. The justification for reversing the promise of color-blind civil rights was that past discrimination requires present effort, or affirmative action in the form of preferential treatment, to overcome long-accrued inequalities. Those forms of preferential treatment built up in our system over time, first in administrative rulings, then executive orders, later in congressionally passed law, and finally were sanctified by the Supreme Court."

Clinging to this false notion of both past and present simply condemns us all to a future where we wallow in the darkness of hegemony. "There is always light." But we must bring that light to all our children so that they may shine brighter in tomorrow's society.

This morning, my daughter was excited to tell me that her class read the inaugural poem by Amanda Gordon. We are choosing wisely.

Here is the poem by Amanda Gordon:

The Hill We Climb

When day comes we ask ourselves,
where can we find light in this never-ending shade?
The loss we carry,
a sea we must wade
We've braved the belly of the beast
We've learned that quiet isn't always peace
And the norms and notions
of what just is
Isn't always just-ice
And yet the dawn is ours
before we knew it
Somehow we do it
Somehow we've weathered and witnessed
a nation that isn't broken
but simply unfinished
We the successors of a country and a time
Where a skinny Black girl
descended from slaves and raised by a single mother
can dream of becoming president
only to find herself reciting for one
And yes we are far from polished
far from pristine
but that doesn't mean we are
striving to form a union that is perfect
We are striving to forge a union with purpose
To compose a country committed to all cultures, colors, characters and
conditions of man
And so we lift our gazes not to what stands between us
but what stands before us
We close the divide because we know, to put our future first,
we must first put our differences aside
We lay down our arms
so we can reach out our arms
to one another
We seek harm to none and harmony for all
Let the globe, if nothing else, say this is true:
That even as we grieved, we grew
That even as we hurt, we hoped
That even as we tired, we tried
That we'll forever be tied together, victorious
Not because we will never again know defeat
but because we will never again sow division
Scripture tells us to envision
that everyone shall sit under their own vine and fig tree
And no one shall make them afraid
If we're to live up to our own time
Then victory won't lie in the blade
But in all the bridges we've made
That is the promise to glade
The hill we climb
If only we dare
It's because being American is more than a pride we inherit,
it's the past we step into
and how we repair it
We've seen a force that would shatter our nation
rather than share it
Would destroy our country if it meant delaying democracy
And this effort very nearly succeeded
But while democracy can be periodically delayed
it can never be permanently defeated
In this truth
in this faith we trust
For while we have our eyes on the future
history has its eyes on us
This is the era of just redemption
We feared at its inception
We did not feel prepared to be the heirs
of such a terrifying hour
but within it we found the power
to author a new chapter
To offer hope and laughter to ourselves
So while once we asked,
how could we possibly prevail over catastrophe?
Now we assert
How could catastrophe possibly prevail over us?
We will not march back to what was
but move to what shall be
A country that is bruised but whole,
benevolent but bold,
fierce and free
We will not be turned around
or interrupted by intimidation
because we know our inaction and inertia
will be the inheritance of the next generation
Our blunders become their burdens
But one thing is certain:
If we merge mercy with might,
and might with right,
then love becomes our legacy
and change our children's birthright
So let us leave behind a country
better than the one we were left with
Every breath from my bronze-pounded chest,
we will raise this wounded world into a wondrous one
We will rise from the gold-limbed hills of the west,
we will rise from the windswept northeast
where our forefathers first realized revolution
We will rise from the lake-rimmed cities of the midwestern states,
we will rise from the sunbaked south
We will rebuild, reconcile and recover
and every known nook of our nation and
every corner called our country,
our people diverse and beautiful will emerge,
battered and beautiful
When day comes we step out of the shade,
aflame and unafraid
The new dawn blooms as we free it
For there is always light,
if only we're brave enough to see it
If only we're brave enough to be it
Commentaries