A Lesson on Doubling

April 02, 2020
Exponential growth is characterized by a rate that is increasing with time. One can use a doubling time to describe such growth. For example, now that it is spring time, one can observe how fast weeds grow. If the doubling time in the area that weeds cover is 3 days, one can imagine that starting with a square foot of weed coverage, in the next three days, the weed will cover 2 square feet. In six days, it will be 4, and in nine days, it will be 8 square feet. And in just 3 weeks, that is, 21 days, the weed area would have doubled 7 times. By that time, 128 square feet will be covered by weeds. That will be a lot of work on my weed whacker. The death rate from COVID-19 behaves similarly. And right now, the doubling time for the number of COVID-19 deaths in the US is 3 days. 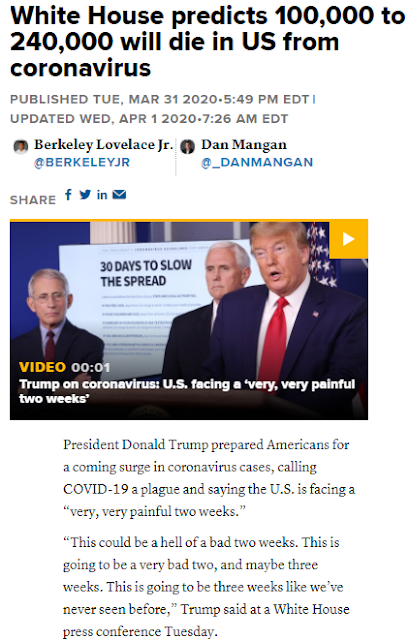 This is a simple doubling exercise and yet, one wonders why the White House paints the worse case scenario as its best case scenario. Is it a simple lowering of expectations so that in the end, someone can declare "victory"?

The following, in my opinion, is a more honest "best case" scenario: