Lawmakers Should Refrain from Prescribing a Curriculum

January 24, 2020
It would be absurd to suggest that a legislative body can create or amend laws of nature. Yet, in education, lawmakers seem confident enough to dictate what should be taught inside a classroom. The Subcommittee on Education of the Virginia legislature is currently considering a bill sponsored by Del. Shelly Simonds that requires "each student in grades six, seven, and eight, starting in the 2025–2026 school year, to complete at least one semester-long or year-long computer science elective course or introduction to technology course." Before the election, Simonds was serving as member of the school board and before that, she was teaching Spanish in an elementary school. It is unfortunate that despite her experience as an educator, Simonds thinks a lawmaking body can serve as an authority on education. There are plenty of reasons why Virginia House Bill 694 should not be passed, and even the chief executive officer of code.org, Hadi Partovi, says "no", when asked the question, "Should Computer Science Be A Mandatory Class in U.S. High Schools?" One important reason can be seen from my native country: The government of the Philippines put into law a new curriculum for basic education that it can not possibly provide to all. There is a difference between requirement and access. One should not confused one with the other. Access should be addressed by lawmakers but not requirements.


Even at Georgetown University, it is a challenge to recruit and keep professors in computer science. In a free market, those who have expertise in computers and technology simply have higher paying jobs available in industry. Therefore, recruiting enough qualified teachers so that a computer course can be made a requirement for all middle schools in the state of Virginia is not possible without considerable increase in educational funding. And with regard to technology, Fairfax county has not even provided one device for each student in its middle schools.

Another reason, not as obvious, for opposing the bill, needs to look at what computer science really is. The contents of the new required course described in the proposed bill are "examining systems and resources of technology, solving problems in technology, introducing microcontrollers, exploring the designed world, computing systems, networks and the Internet, cybersecurity, data and analysis, algorithms and programming, and the impacts of computing." The list clearly shows that this is multidisciplinary. Most of its fundamentals are covered in the physical and mathematical sciences. The impact of technology on society is a topic a course in civics can cover. And like what most computers do, I will do a rerun from a previous post in this blog:

From Matthew Murray at ExtremeTech:


The subjects that should be strictly enforced as part of a K-12 curriculum in this country are the general-use ones that, for the most part, already are. Everyday mathematics, up to and including algebra. History and current events, both world and American. Surveys of biology, chemistry, and physics, for understanding how and why the world works. Civics, because knowing what the government should (and should not) do, and the citizen’s role in society, is key to adulthood. And, of course, English, and as much of it as possible, so students possess the elemental tools they need for communication. Within all these subjects there needs to be a focus on imagination, logic, reasoning, and problem solving — from which everything else in life will eventually come. The rest is gravy. Without these basics, being a terrific chef, a terrific carpenter, or even a terrific programmer, is meaningless.

In 2010, USA Today reported statistics from the 2009 Programme for International Student Assessment that showed that “out of 34 countries, the US ranked 14th in reading, 17th in science, and 25th in math.” These are the problems we need to fix first. Once we do, and once our kids are competitive and commanding in these root areas, then and only then should we worry about whether programming needs to be given higher priority. Until then, and perhaps even after, helping kids understand what computers are, what computers are capable of, and where we can fit into the grand scheme of technology, is a good idea. Provided we still teach them how to make omelets and picture frames, too.


Jessie Duan, Co-teacher for a high school AP Computer Science class, also responds "No" to the question, "Should Computer Science Be A Mandatory Class in U.S. High Schools?" In her argument, she cites the overcrowded curriculum students are already facing in schools. Related to this, Mary Wagner, a music educator, is asking her friends on Facebook to call their representative: 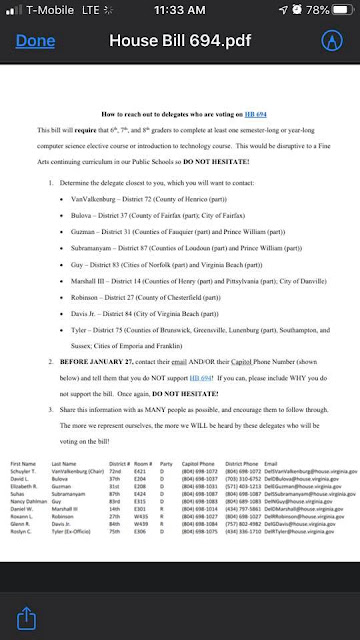 Currently, my son, who is in Middle school can take two courses as electives each year. He has chosen Orchestra and French. These courses are not required. With a computer course required, a middle school student the has to choose between either pursuing a foreign language or a course in music or arts. Having a "required" elective can mean less opportunities for music and arts. The Fairfax Arts Coalition for Education (FACE) therefore opposes this bill.

Clearly, the bill is not a correct prescription for schools in Virginia. It should be opposed for so many reasons. The most important reason is funding and priorities need to be set. Lawmakers, first of all, must ensure first that all schools can provide the option of taking a "computer" course. Access is what requires our attention, not requirements.

Music is as important as computer science and yet, we do not require music in middle school.