FCPSOn: One Laptop for Each Student in Fairfax County Public Schools

January 17, 2020
FCPSOn, the program of Fairfax County public schools (FCPS) aimed to "provide students with equitable access to meaningful learning experiences and technology to support their learning", was first introduced several years ago in some schools in Chantilly. Since then, the program has been evaluated by a team of researchers from the Center for Research and Reform in Education at Johns Hopkins. In their most recent evaluation, the researchers conclude, "Guaranteed access to a personal computer has succeeded in “leveling the playing field” among students of varying socio-economic backgrounds, learning interests, and needs". FCPSOn is scheduled to be implemented in all middle schools starting next school year. CoveringTheCorridor reports that in the proposed budget, $4.0 million would be used for this expansion. One of my son's teachers in middle school was therefore looking forward to next year when each and every student in her French class would have access to a laptop. Presently, she finds it very difficult to incorporate technology in her classroom since not all students have access. Sadly, my hopeful conversation with this teacher last night was dashed by news that FCPS might not actually expand FCPSOn to middle schools because there are, apparently, parents who are voicing opposition because of the increased screen time they anticipate for their children. If the planned expansion of FCPSOn does not happen, this will be a major blow against the county's attempt to establish equity in its schools. It is simply unfair for a county to continue using Blackboard, Google classrooms, and other applications in its curriculum when not all students have access to this technology. It is equally wrong to listen to a few but more vocal parents, and dismiss what research is telling us about "One Laptop for Each Student" programs.


First, FCPS has annual reports regarding its pilot program and in the most recent report, here are some findings that are relevant to the planned expansion in middle school (There are two middle schools that have been part of the pilot program since 2016):

Its own pilot program should help guide FCPS. As important, FCPS needs to consider what is likewise known in this field. Unfortunately, although the "One Laptop for Every Student" has been implemented in other school districts and countries, good research on its effects on learning outcomes is limited. A meta-analysis performed in 2016 identifies less than 10 studies meeting all criteria for inclusion. These are peer-reviewed, have experimental and control groups, and provide quantitative findings. Here is the summary:

The effect sizes may be small, but these are all positive. It is worth noting that laptop use produces larger benefits in science and writing. Improving in science by almost one half of a standard deviation  (upper limit) is impressive. And only in reading, do we see a negative effect in the lower limit.

We are in the 21st century and human knowledge has increased substantially in the last three decades before laptops and the internet. Digital literacy is part of this century. Thus, deciding on whether laptops are necessary in schools or not in this century, is now equivalent to asking whether a child needs a paper and pencil when attending school in the past century. Laptops are now necessary. It is comforting to see that the best research on how laptops influence learning outcomes shows benefits. That is a definitely a plus.

The concern that laptops will simply contribute to an increased screen time is misplaced. First, research from Common Sense Media shows that despite new technology, "watching television and listening to music still dominate young people's media diets". This is true especially for low-income children, Blacks, and Hispanics. Second, laptops and computers are often used only for educational purposes, unlike smartphones, which are far more ubiquitous. Last and probably most important of all, the digital inequality is very evident with laptops:

My daughter, who is not yet in middle school, was working on our computer at home the other night. She was actually collaborating with a classmate on a presentation that introduces algebra. Here was one of the slides the two students made: With technology, students could work together even outside school. I saw it with my own eyes, my daughter and her classmate could edit the slide and could see what each person was doing.

In Fairfax county, as on other places in the United States, there are homes that provide technology to their children. The 21st curriculum in Fairfax county as well as in other places now includes classrooms in the cloud, project-based learning, and others that require laptops. It is simply wrong to have such a curriculum with students not having access. The school board, I hope, keeps its eye, on the most important reason behind FCPSOn: 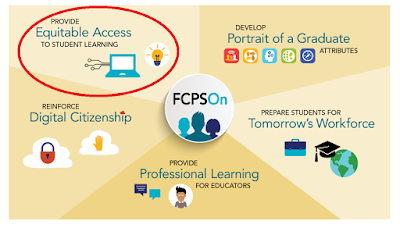 Education is for all students. Equity is a must. There is a simple compromise here as well: If parents do not want their children to have a laptop, this program could be easily made optional.
equity in education Evidence-Based Research Technology in Classroom