First, no one has really appreciated how sobering the results are. Although the country is last in reading comprehension, and second to last in both mathematics and science, the much more important point is what the scores are telling us. "Fewer than 1 in 5 students in the Philippines have the minimum level of reading skills for further education", according to PISA. Below is the grade distribution (All of the data and figures shown in this post are copied from OECD (2019), PISA 2018 Results (Volume I): What Students Know and Can Do, PISA, OECD Publishing, Paris, https://doi.org/10.1787/5f07c754-en.): 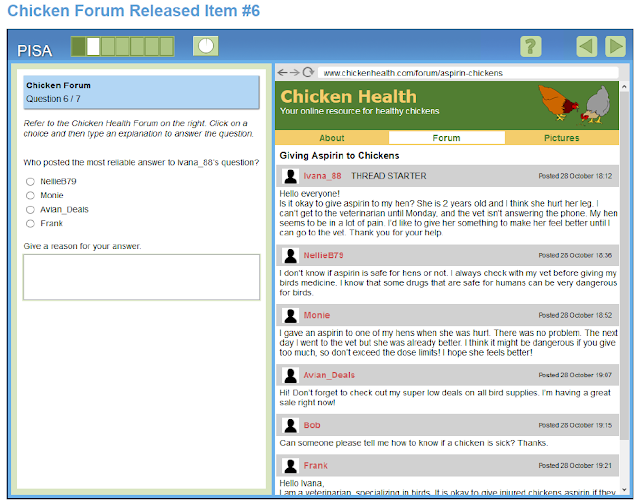 In the above question, there is only one wrong answer: Avian Deals.

Half of the students cannot answer a question like the one displayed below: 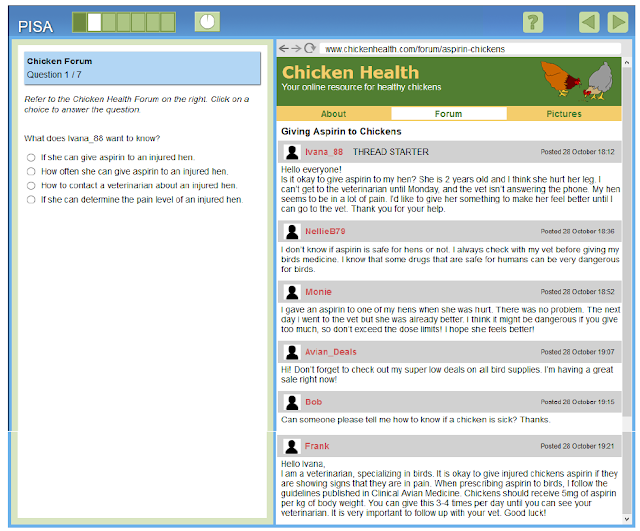 The results in mathematics and science are no different, yet educators seem to focus only on reading comprehension. The following is the score distribution in mathematics.

In fact, the above looks almost identical to reading comprehension. Therefore, the same observations can be stated:

Here are the results in science:

If I say "80 percent of 15 year-olds in the Philippines cannot proceed...", I will sound like a broken record. But here is the piece that should really wake us up.

While 80 percent of students in the Philippines do not reach level 2, for the rest of the countries that participated in PISA, nearly 80 percent do. Students from the Philippines cannot "use basic or everyday scientific knowledge to identify a valid conclusion from a simple data set".

With regard to these PISA exam results for the Philippines, this is DepEd's response:

"By participating in PISA, we will be able to establish our baseline in relation to global standards, and benchmark the effectiveness of our reforms moving forward. The PISA results, along with our own assessments and studies, will aid in policy formulation, planning, and programming.”

DepEd will take measures in the following areas:

(1) K to 12 review and updating
(2) Improvement of learning facilities
(3) Teachers and school heads’ upskilling and reskilling through a transformed professional development program and
(4) Engagement of all stakeholders for support and collaboration.

With this response, it is clear that DepEd will also fail in reading comprehension, math and science exams. The poor performance is across the board. The entire basic educational system is broken.

I have been asked several times on Facebook on what the solution is. In response, I will just cut and paste from this blog:

How Do Math Teachers in the Philippines Fare?

The following graphs summarize the findings.


The above measure is found to correlate strongly with scores obtained by the teachers on tests that measure their knowledge in mathematics. With regard to content, teachers in the Philippines obtain a low score compared to teachers in other countries.

Not only do teachers in the Philippines perform poorly in math knowledge exams, they also score low in tests that measure how well they can teach math.

With the above in mind, it is only timely to look back at an old article written by Flor Lacanilao on this blog:

Studies on education abroad have shown that the best way to improve basic education is to improve first higher education. And the best way to improve both is to put only the right people in charge. Right people refers to those who have made major contribution to one’s field, as shown by properly published research works (that is, following internationally accepted criteria). At present, none of those in charge in higher and basic education has such minimum requirement.
For basic education, the above prerequisite will insure that (a) program components are based on tested studies abroad, (b) curricular changes are based on properly published studies of local problems, and (c) thay have undergone trial runs or verification at selected schools before nationwide implementation.
For more discussion, see “K+12 most likely to fail” (Inquirer, 17 Feb 2012) and “A critique of some commentaries on the Philippine K-12 program”.
[Dr. Flor Lacanilao obtained his Ph.D. (specialization in comparative endocrinology) from the University of California at Berkeley. He served as chairman of the Zoology Department at UP Diliman, chancellor of UP Visayas, and chief of SEAFDEC in Iloilo. Email florlaca@gmail.com]