April 23, 2019
Every year I teach general Chemistry, I spent a couple of lectures on greenhouse gases and climate change. This time, as in other years I highlight the fact that the carbon dioxide level in the atmosphere continues to rise. And it has been above 400 ppm for several years now. 400 ppm maybe seen as a tipping point, but one thing is clear, carbon dioxide levels will be at least this high in the coming years. Human activity has caused this and unfortunately, even with reduced emissions, neither a drop in carbon dioxide level nor global mean temperature will occur. We must be prepared then for what climate change entails. Even basic education is not immune to global warming. 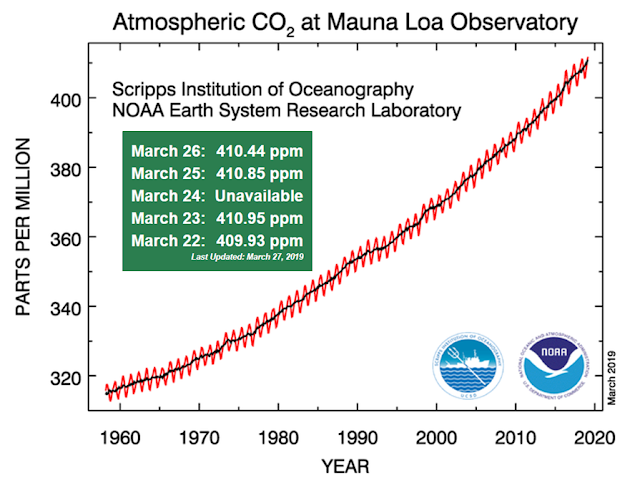 In a paper published in the Proceedings of the National Academy of the Sciences (USA), Heather Randell and Clark Gray show that warmer temperatures correlate with fewer years of schooling in Southeast Asia:

These are the predicted years of schooling among children aged 12 to 16 as a function of the temperature a child experiences during his or her early years. What is surprising is that children in households with parents with higher educational attainment are much more vulnerable to climate (the red-orange data). The authors offer the following mechanism behind this correlation: "In Southeast Asia, early life heat is negatively correlated with education, while there is no significant relationship in later childhood. In this region, the impact of heat exposure on physical and cognitive development in utero and early childhood is likely the main pathway." The Philippines is not included in the study, only Cambodia, Indonesia and Thailand, but one can not ignore the fact that high heat and humidity are dangerous to human health.

The authors leave the following for us to think about:


"As the effects of climate change intensify, children in the tropics will face additional barriers to education. Achieving the SDG of universal primary and secondary school completion will necessitate the effective development and implementation of policies that reduce vulnerability to extreme temperature and precipitation, particularly during prenatal and early-childhood periods. Ensuring food security and income stability in the face of adverse climatic conditions (for example, through the expansion of crop insurance or social protection programs), as well as limiting heat exposure among pregnant women, will be critical."