March 11, 2019
"There were a million black boys last year who wanted to play basketball in the NBA. Of that million only 400,000 will even make it to play high school ball. Of that 400,000 only 4,000 will make it to play college ball. Of that 4,000 only 35 will make it to the NBA. Of that 35, only 7 start. And the average life in the NBA is 4 years. So the real problem is that we have a million brothers looking for seven full time jobs that last 4 years and yet last year we had 100,000 jobs available to be a computer programmer, engineer or doctor and only 1,000 brothers qualified. So our appeal to black males is to realize the odds, that which you do the most is that which you will do best. ... So we have the ability in either math or science or music and sports. That which you do most, is that which you do best. If you play basketball from 3 o'clock to 9 o'clock you will be a very good basketball player. If you went home and went to the library you would be a good scholar. We need more black male role models that will encourage our youth in math and science." - Dr. Jawanza Kunjufu 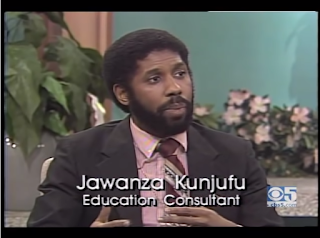 I was first introduced to this statement by Kunjufu through a message I got on Facebook last night from the former principal of my children's elementary school, Brian Butler. These words were spoken in 1988 during an episode of KPIX-TV's People Are Talking. It was an episode that honored the memory of Martin Luther King. Later in this episode Kunjufu also suggested that the classrooms in schools in the United States are specifically designed for white female children since most teachers are white females. Then he cited that the "least challenging place in special ed is the white female then the black female then the white male and then the black male so white boys also have similar problems with this female run classroom."

Fast forward thirty years later, a recent publication on a study made in Tennessee shows "meaningful effects for Black students in both reading and math, race-matched students in the bottom-most preparedness quartile in math, and race-matched students assigned to teachers in the middle two teacher performance quartiles in math." It is especially difficult to extract the direct effects of race-matching since education is indeed influenced by so many factors. Just take for instance the fact that teachers differ from each other in terms of subject competence. Effectiveness likewise is not necessarily correlated with race or gender. But even with this grave limitations, it is amazing that significant effects are still seen which indicate that black students perform better when they are in a classroom taught by a black teacher. It is seeing a good model, if nothing else, that counts.

We need diversity in our teacher workforce. Of course, the makeup of public school teachers is decided by college completion. This vicious cycle can therefore be addressed first at higher education. We need more black teachers. We need more male teachers.