March 06, 2019
This blog started about seven years ago. One of its first posts was an opinion article I wrote and was previously published by the Philippine Star. In that article, I emphasized that DepEd's K to 12 was not the solution to the problems plaguing basic education in the Philippines. Now, the initial results are out and the outcomes are dismal. Scores in the National Achievement Tests are down, passing rates in the licensure exams for teachers are now at their lowest level, and employment data indicate that high school graduates are unable to find work. 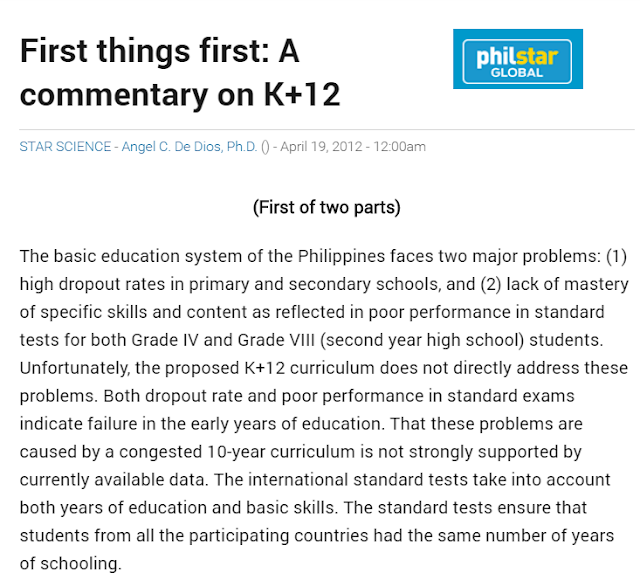 Senator Gatchalian, a staunch supporter of K to 12 during its initial implementation, shared these grim outcomes recently. In his presentation, he shows how scores in the national assessment for both grades 6 and 10 have dropped since the implementation of DepEd's K to 12:


Gatchalian also mentions that it is now far easier to become a lawyer, citing that the current passing rate for teachers is only 27 percent.

This comparison, by the way, has likewise shown up in EducationWeek, indicating that a similar situation exists in the United States.

The fact that the United States is also witnessing a decrease in competence among teacher aspirants means that the problem does not really lie in the number of years in basic education. The problem in this case is with higher education, which likewise has been pointed out on numerous occasions in this blog.

Philippine basic education is in a depressing state because the roots of the problem are not being addressed. Instead, billions of pesos have been wasted on a new curriculum which do not respond to the needs in the early years. And the downward trend will only continue especially if all the policymakers can point at is the supposedly bad implementation of the curriculum. The problem is not implementation. The problem lies in how we prioritize.