Our students have changed radically. Today’s students are no longer the people our educational system was designed to teach... ...It is now clear that as a result of this ubiquitous environment and the sheer volume of their interaction with it, today‟s students think and process information fundamentally differently from their predecessors... ...What should we call these “new” students of today? Some refer to them as the N-[for Net]-gen or D-[for digital]-gen. But the most useful designation I have found for them is Digital Natives. Our students today are all “native speakers” of the digital language of computers, video games and the Internet....

To this, George Couros provides us something to think about, "“Kids are sooooo much better with technology than adults are”? Yes, many kids have never known anything BUT a world with iPhones and YouTube, but the same adults have lived in that world the same amount of time kids have, and sometimes, even more. Add the years of experience in other parts of life; there is no reason that kids should be better at technology than adults."

Prensky's notion of digital natives has caught the attention of educators that even a website for teachers back in 2013 has highlighted the perception of a disconnect between the youth and adults.


There are even internet sources that make such great claims on why 21st education must be totally transformed because the current students, the "digital natives", bring a different set of skills and experience to the classroom. Below is an example from Jukes and Dosaj. 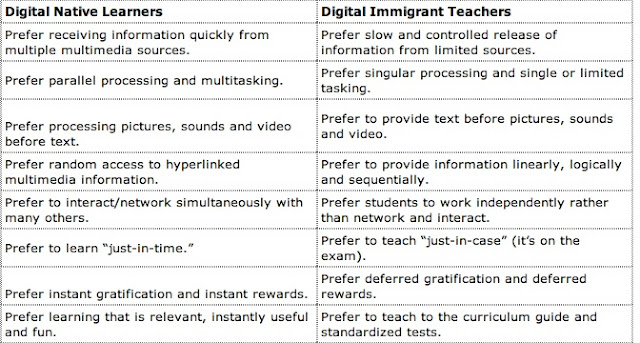 The concept of a "digital native" learner is an example of an idea in education that is not based on research or evidence. And ample research has shown that this is a myth.


Kirschner and De Bruyckere have reviewed work on this area and have found strong evidence against the concept of "digital natives" and "multitasking". They conclude:


"As has been shown, there is quite a large body of evidence showing that the digital native does not exist nor that people, regardless of their age, can multitask. This corpus of research also shows that though learners in this generation have only experienced a digital connected world, they are not capable of dealing with modern technologies in the way which is often ascribed to them (i.e., that they can navigate that world for effective and efficient learning and knowledge construction). Finally, the research shows that these learners may actually suffer if teaching and education plays to these alleged abilities to relate to, work with, and control their own learning with multimedia and in digitally pervasive environments."

However, there is indeed a "digital divide" between generations. Christopher Ball and coworkers talk about this in a paper published in the Journal of Applied Gerontology.  But the divide is not about skills or intellect. The divide is social. Here is what research says:

The divide is not occurring because there is a difference in ability, cognition, or knowledge. There are no differences or magical powers provided by being born or growing up in the technology age. The divide is happening because there are some who chooses to use their smart phones during dinner. Technology seems to have failed us in teaching how not to be rude.