"How Can We Lose When We're So Sincere?"

May 16, 2018
I had a chemistry professor in Ateneo who taught me not just chemistry but also some nuggets of wisdom. Back then, rallies against the Marcos administration were widespread. This professor reminded me that sincerity was never enough. Competence was equally necessary. Sincere ignorance and conscientious stupidity were dangerous. With this reminder, he also cited a strip from Charlie Brown, "How can we lose when we're so sincere?" Aquino obviously had made serious errors during his administration. Without careful vetting, Aquino appointed a Chief Justice to the Supreme Court that later would be ousted by a quo warranto petition. Aquino also rushed a mass vaccination program against Dengue, disregarding the proper protocols and ignoring the advice of experts. And in basic education, Aquino plunged the nation into a new K-12 curriculum without careful preparation and analysis and with total disregard for the resources necessary.


One glaring example of Aquino's incompetence on basic education was his desire to equip every Filipino student a tablet instead of a textbook: 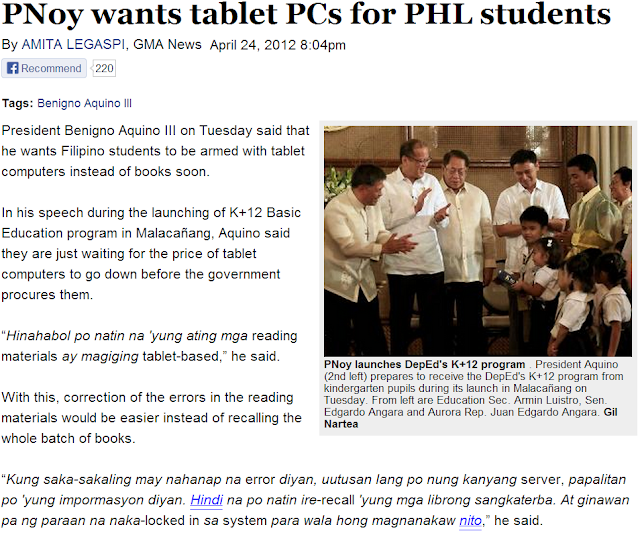 His reasoning was based on his perception that if materials are online, errors could be easily corrected. To this, I previously wrote on this blog:


Technology can be an enabler - this is really the nature of technology. In education, technology can help enliven a class. Seeing a Cisco ad that shows students from two different countries interact through a webcam is an example. Replacing textbooks, replacing teachers - this is entirely different. The fact that content can be changed instantly is not purely an advantage. Of all the technology that is here in the US, it is amazing that applying and closing a mortgage still involves a thick set of papers that need to be read and signed. There is permanence in documents that are printed on paper. The cost of changing things makes it more important to be thorough and careful in the production. The fact that revisions are seen to be a lot easier and simpler to do in the future only caters to carelessness. There is no need to be particularly concerned with spelling and grammar when writing articles in this blog, for example. It does not cost that much because it can be easily erased. In fact, in a fraction of a second, this entire blog could easily disappear.

Actually, even if I erase this blog, there are numerous cached copies out there. It is one reason why "fake news" is such a big concern nowadays. Misinformation is occurring online, where it spreads quite fast, and is, in reality, more difficult to rectify.

Antonio Go, in a recent opinion published on the Inquirer, reminds us just once again of the numerous errors on learning materials provided to students in the Philippines:

Here are some of those errors:

These are the errors now read by Filipino children. Indeed, sincere ignorance and conscientious stupidity are dangerous.