When Fake News May Cause Harm

June 20, 2017
Facebook is definitely a place where authenticity is not guaranteed. It is, after all, just one letter different from "Fakebook". "Social media can be dangerous if you think that that's real life", says Seth Stephens-Davidowitz, author of Everybody Lies. He says what people look up with Google is a much better "digital truth serum". And in his analysis, he finds that it is not the politically charged issues that really occupy people's deepest worries or concerns. People care more about their finance and health. This is where fake news can do real great harm. Recent research shows that we are less likely to be skeptical if we think that we are not alone. We are less likely to verify when we are in a social context, somehow feeling secure or "safe in numbers". Combined this with a seemingly "trustworthy" speaker, fake news can indeed be a serious societal problem. There are plenty of examples one can easily find by simply browsing through posts on Facebook. There are cases, however, where the jury is still out. One example is a recent advisory issued by the American Heart Association (AHA).

The advisory begins with a factual listing of how much of each type of fatty acids is present in various fats and oils:

The advisory then states, "...because coconut oil increases LDL cholesterol, a cause of CVD (cardiovascular disease), and has no known offsetting favorable effects, we advise against the use of coconut oil." Such statement hinges on the assumption that saturated fats are linked to heart disease. Based on some highly publicized research, this view is apparently wrong. "Saturated fats are not associated with all cause mortality, CVD, CHD, ischemic stroke, or type 2 diabetes, but the evidence is heterogeneous with methodological limitations." This is the conclusion reached by de Souza and coworkers in a paper published in the British Medical Journal. And in a 2013 meta-analysis, Schwingshackl and Hoffmann state that "The present systematic review provides no evidence (moderate quality evidence) for the beneficial effects of reduced/modified fat diets in the secondary prevention of coronary heart disease." However, in a much more recent research article, Zong and coworkers find that "Lauric acid, myristic acid, palmitic acid, and stearic acid are associated with an increased risk of coronary heart disease, after multivariate adjustment of covariates." Coconut oil is rich in lauric acid. Who should we believe? The perceived absence of a connection in the previous studies between saturated fats and heart disease apparently is due to not considering what people have used to replace saturated fats in their diet. The AHA advisory therefore appears to be a response to a widely becoming popular notion that coconut oil offers health benefits. The title of a USA Today article covering this AHA advisory captures the message AHA wants to deliver. 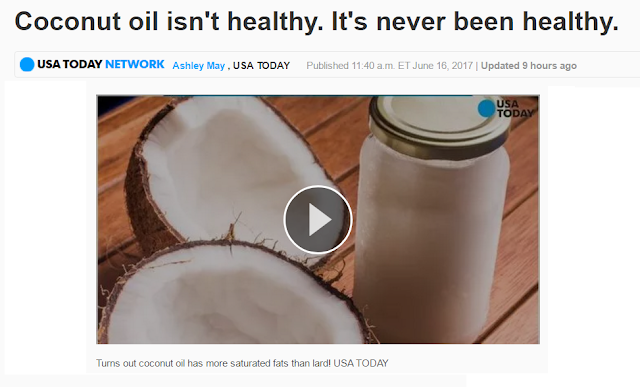 In the Philippines, a producer of coconut oil, in response to the AHA advisory, Dr. Fabian Dayrit, current president of the Integrated Chemists of the Philippines and the chairman of the Asian and Pacific Coconut Community’s Scientific Advisory Committee for Health, has written the following:

As teachers, we are very much concerned about our student's ability to verify information they get from the internet. As a society, we should be concerned with how people obtain information regarding issues that are of importance. Unfortunately, even on issues that are neither "Republican" nor "Democrat", progressive nor conservative, atheist nor theist, information often comes with a sales pitch. The reason is perhaps simple. It is not clearly black and white. In "Is All Saturated Fat the Same", Dr. David Katz writes, "In the real world, “all good” vs. “all bad” is reliably more about salesmanship than data."