A Gap in Executive Function Correlates with Poverty

June 09, 2017
By now, we should all be acquainted with academic achievement gaps that correlate with socioeconomic status. Children from poor families start kindergarten behind their wealthier peers by as much as one standard deviation in both reading and math. A recent analysis of nationwide data on young children in the United States reveals that indigent children are also scoring lower in assessments that measure working memory and the ability to switch gears. These mental functions, the ability to hold onto and work with information, and the flexibility to shift one's attention are part of what we call executive functions of the brain. Children immensely develop executive function skills during ages 3-5. The Center on the Developing Child at Harvard University in its research brief on executive function skills takes note of the following: "Adverse conditions such as abuse, neglect, community violence, and persistent poverty can disrupt brain architecture and place children at a disadvantage with regard to the development of their executive function skills."

In the nationwide study, working memory has been assessed by the Numbers Reversed task, during which a child is given a set of numbers and is then asked to give back those numbers but in a reversed order. Mental flexibility, on the other hand, is measured by Dimensional Change Card Sort (DCCS), described in the following figure:

Executive function skills actually include self-control, but is not measured in the study. However, it has already been suggested that poverty also adversely affects a person's self-control. The gaps in both working memory and mental flexibility at the beginning of kindergarten are actually substantial (measured in terms of standard deviation): 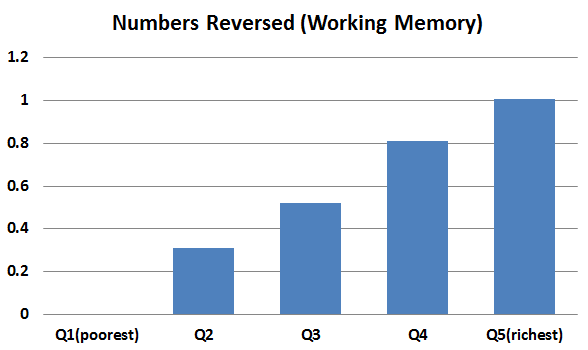