June 22, 2017
For 45 Euros, one can buy a pink lipstick inspired by the "opulence of the court of Versailles" and send it to the the Philippines to help teachers in the war-torn region of Mindanao. After all, "teachers in the Philippines are neither underappreciated nor underpaid", according to the secretary of education Leonor Briones. Nikko Dizon of the Inquirer also writes "In times of despair, a clean hijab or a nice shade of lipstick—coupled with basic human kindness — can be one’s source of hope and courage." A paper published in the International Journal of Disaster Risk Reduction, "What is appropriate and relevant assistance after a disaster? Accounting for culture(s) in the response to Typhoon Haiyan/Yolanda", tries almost desperately to make sense of how assistance should be extended to victims of a disaster in the Philippines. It paints a disconnect between the values of international donors and those who are affected, merely deducing it to a disregard of differences in culture. But honestly, would you really follow my advice to buy a lipstick and donate it to victims of terrorism in the Philippines?

Of course not, Philippine culture is not shallow. What is evident is that leaders in the Philippines often resort into facades to hide their inefficiency and corruption. The elite in the Philippines uses seemingly inspiring anecdotes to provide evidence on actions that they take. For instance, the former education secretary used an encounter with a principal in promoting the inclusion of lipstick in relief aid. His eyes were apparently opened when he heard a principal say "Brother, I want to look good when my students will see me. I want them to think that I have recovered so that they will be inspired to also move on." This is the same education policy maker in the Philippines who said:


"... If we look at the old education system, a lot of the subjects included are very alien to Filipinos, especially the sciences and math. I think that’s why in the past several years, we have rated very low in those two subjects, science and math. I think the old curriculum was not really enmeshed with essential elements of the Filipino culture. We have to ask the question: How does a Filipino naturally think?"

Obviously, Luistro is not the only person infected with this disease of turning assumptions into facts by simply making it sound reasonable. The current secretary of education Leonor Briones recently concluded that teachers in the Philippines receive good treatment:

The reason Briones used to reach such a conclusion is the apparent migration of teachers from private schools to public schools. There is a reason why in science we have standards. We know how long a meter is and we know how much mass really is one gram. Without such universal standards, we can easily make arguments that may appear sound but are actually quite erroneous. Whether teachers are underpaid or not can only be answered by asking whether their salaries are in fact adequate enough for their cost of living. Can a public school teacher afford all the basic needs of his or her family? Why teachers from private schools are transferring to public schools may simply be due to the fact that these teachers are simply in a much more dire situation.

Without using standards, one is really at the mercy of misinformation. For this reason, it is not possible to gauge the effectiveness of policies and programs taken by the Philippines. Its new K to 12 curriculum is a great example. One can easily issue a statement that K to 12 is a success, as Briones did in January of 2017:


There is no assessment that backs up this assertion. In fact, during the opening of this school year, I happened to see the following post: 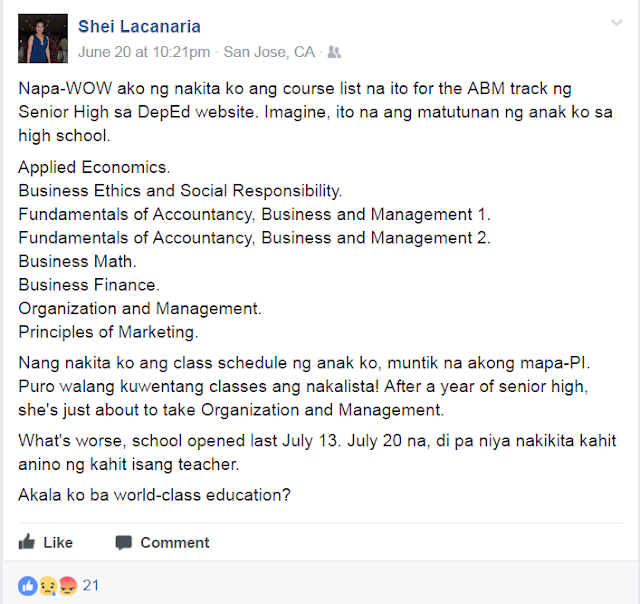 Lacanaria was first very impressed with the list of courses under the ABM track of the senior high school of DepEd's K to 12, but when she saw what subjects her daughter was currently enrolled, only Organization and Management was included. This was already after spending one of the additional two years of DepEd's K to 12. Worse, school had already been opened for a week and her daughter had not seen even the shadow of a teacher.

When we are facing an economic recession, we tend to buy traditional inferior goods, go and watch morale boosting entertainment, and of course, beauty products. In a dearth of research-based evidence, we likewise subscribe to mere impressions.