What We Could Learn from Placards

December 05, 2016
Young people need to be positively engaged in society. Their voices when pointed at a pathway forward can send a strong message to elected officials and lead to a fruitful dialogue. The placards the youth bring to a protest rally represent the views of the next generation. The signs they display however speak not only of their aspirations, but also reflect the quality of education they have received. After all, young minds on social issues are shaped either at home or school.

Presently, protests are being held against the construction of the Dakota Access Pipeline in the United States. The Standing Rock Sioux Tribe is leading the protest with a lawsuit filed in court citing that the construction "will damage and destroy sites of great historic, religious, and cultural significance to the Tribe". In addition, there is concern that construction as well as future oil spills can harm the Tribe's drinking water. This past Sunday, the permit for the pipeline project has been turned down by the secretary of the Army Corps of Engineers, a victory for the protests.

The Tribe was not alone in their protest. Environmental and civil rights activists, and other Native American tribes have joined. And, of course, the youth in these tribes from as far as New York are among those who are visibly against the proposed pipeline.

These youth are holding placards. They are speaking their minds on a very relevant and consequential issue. It is positive, respectful and peaceful, yet very formidable. This is clearly an instance that demonstrates that the youth are positively engaged in society.

ABS-CBN News in the Philippines reports "From tweets to the streets: Millennials lead Marcos burial protests". Thus, quite a number of people view the active participation of youth in these protests as a good sign. Placards can indeed carry positive messages as seen in the placards displayed by the Sioux youth, but the opposite can also happen. Katrina Stuart Santiago writes in her column in Manila Times:


A placard that says “F*ck you Marcos” has gotten the same ire. Trolls ask: Is this what being educated looks like? Is this what it means?
Many placards in fact curse at the Marcoses, some more respectful than others: “F*ck you po Marcos!” says one sign. And for a more contemporary Tagalized version: “Pakyu po.”

These signs are, of course, do not point to youth being positively engaged in society. Fortunately, the voices of the youth are not one. There are others, and a post from the Kabataan (Youth) Party List provides some much needed hope. At least, this one seems to demonstrate some intelligence. 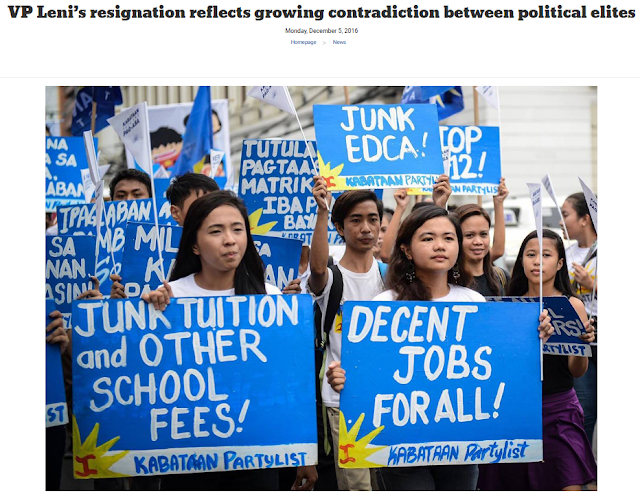 In the aftermath of the resignation of Vice President Leni Robredo as HUDCC head, Kabataan Partylist Rep. Sarah Elago said that it only reflects the growing contradictions among the ranks of the political elite.

“Vice President Robredo’s resignation signals a deepening rift inside the Duterte administration, a rift not motivated by their desire to serve the people but by each camp’s quest for absolute power,” Elago said.

“It’s primetime political drama: on one hand, you have a president who calls for unity and healing, yet resorts to unceremonious dismissals in an attempt to ease the fractious power relations in his Cabinet. On the other hand, we have a vice president hailing from the former ruling party, who is visibly maneuvering in what is unfolding to be a Liberal party restoration plan. The game is only beginning, but to make sense in all these, we must ask: what’s in it for the Filipino people?”

“In this high-level drama, the Filipino people are the real victims – for instead of having the issues and concerns of the oppressed and the marginalized take center stage, we are forced to binge-watch what is appearing to be a long-running political circus,” Elago said.

No love lost for Robredo

“To return our focus on issues that matter, we should assess the Vice President’s resignation from the lens of the people that she should have served. And mind you, the picture does not look good,” she added.

As housing czar, Robredo is tasked to improve housing services especially for the poor. Yet Elago notes that even from the ranks of the urban poor, Robredo’s performance in her short stint is found lacking.

“VP Leni Robredo’s brief tenure as HUDCC chief focused on the continuation of the pro-business trends made more prominent during the Aquino administration. She called for greater participation of the private sector in socialized housing which is as contradictory as it sounds. This policy has given rise to soaring amortization rates and inaccessible housing units for the poor,” KADAMAY said in a statement released right after Robredo announced her resignation.

“Demolitions have also remained rampant throughout the country, a fact that her late husband stood against at certain points. However, she made no fundamental or even incremental steps to address this. The Housing budget for her office was slashed yet looking towards corporations for help was never the solution but merely widening the cracks of an existing problem. Socialized housing is not socialized but commercialized. This is something Robredo did not seek to remedy,” KADAMAY added.

“Clearly, for the urban poor and the people who Mrs. Robredo should have served, there is no love lost,” Elago said.

“Thus, we join the urban poor sector in calling for a replacement that will indeed be able to recognize and fight for the housing rights of the poor,” Elago added.

The youth lawmaker, meanwhile, has some stronger words for embattled Commission on Higher Education (CHED) Chair Patricia Licuanan, who was also instructed by Malacanang to stop attending Cabinet meetings.

“CHED Chair Licuanan said that she will not resign from her post despite the President’s clear rebuke. Why does she want to remain in office? Is it because she is sensing that she still needs to be in CHED to protect the interests of big profit-hungry school administrations, just as she has done in the past? Is it because she feels she still needs to be in CHED to counter the growing clamor for free public education? Is it because she thinks she needs to cling to power for her to once again approve a new wave of tuition and other fee increases this coming academic year?”

“Mrs. Licuanan, in your term as CHED chair, the higher education situation has gone from bad to worse. Your agency has become nothing but a stamp pad for tuition hikes, and the policies you introduced and supported further transformed higher education into the monstrous for-profit behemoth it now is.

“For the youth, it is better if you would resign immediately and provide space for a successor that will hopefully join the students’ clamor for affordable and accessible education,” Elago ended.###
Commentaries