What Is the Difference Between a Compound and a Molecule?

December 07, 2016
My son brings home every Tuesday a folder. It often contains a newsletter from his teachers. This week's newsletter comes with a list of questions that the teachers suggest that I ask my son. One of the questions is: "What Is the difference between a compound and a molecule?" My son's response is that a molecule is composed of two or more atoms joined together while a compound consists of at least two different elements. As a chemist, I could have been excruciatingly fastidious with this question, but I simply reminded myself that my son was just being introduced to chemistry. Actually, my son's answer is not too far from what the Jefferson Lab says in its science education site:


A molecule is formed when two or more atoms join together chemically. A compound is a molecule that contains at least two different elements. All compounds are molecules but not all molecules are compounds.

The meaning of both terms, compound and molecule, needs to be learned and memorized. Once this is achieved a student can then infer that "All compounds are molecules but not all molecules are compounds." Is this critical thinking? Perhaps, it is, but only at a very early stage. This stage introduces a child to a discipline that involves rules and terms. In a way, it demonstrates the importance of giving a child something meaningful to think about. Critical thinking can not really stand without knowledge. For a fifth grader, that knowledge may be either facts or definitions. Gregory in "Discovery Or The Spirit And Service Of Science" reminds us of that morning in 1591:


"Members of the University of Pisa, and other onlookers, are assembled in the space at the foot of the wonderful leaning tower of white marble in that city one morning in the year 1591. A young professor climbs the spiral staircase until he reaches the gallery surmounting the seventh tier of arches. The people below watch him as he balances two balls on the edge of the gallery, one weighing a hundred times more than the other. The balls are released at the same instant and are seen to keep together as they fall through the air until they are heard to strike the ground at the same moment. Nature has spoken with no uncertain sound, and has given an immediate answer to a question debated for two thousand years."

It was a question debated for so long and was settled by a single experiment. It was a perfect example of how science works.


"The physicist Richard Feynman liked to tell a story about how when he was a little kid, he asked his father, “Why do things fall?” As an adult, he praised his father for answering, “Nobody knows why things fall. It’s a deep mystery, and the smartest people in the world don’t know the basic reason for it.” Feynman liked his father’s answer, because his father realized that simply giving a name to something didn’t mean that you understood it. The radical thing about Galileo’s and Newton’s approach to science was that they concentrated first on describing mathematically what really did happen, rather than spending a lot of time on untestable speculation such as Aristotle’s statement that “Things fall because they are trying to reach their natural place in contact with the earth.”"

Teaching and learning are difficult because we often tend to speculate and not just describe what actually happens. We have intuition and bias, which frequently get in the way of facts. We like to give explanations that sound reasonable, yet not fully supported by evidence. After all, when we let a feather and a stone fall, we find that the stone always hits the ground first before the feather does. 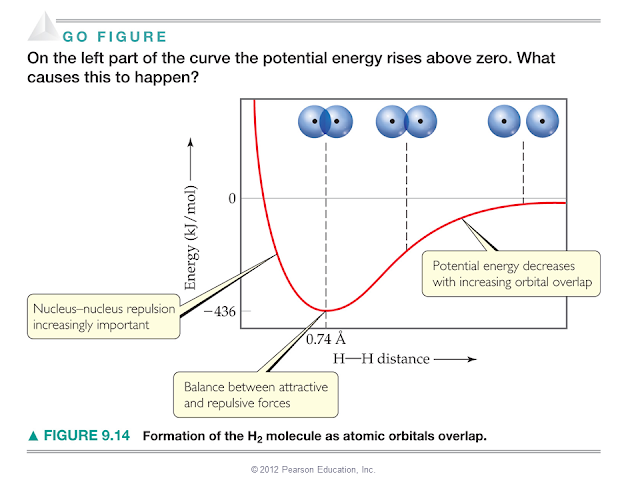 It is indeed very attractive to explain the formation of a chemical bond between two hydrogen atoms in a hydrogen molecule as a balance between attractive and repulsive forces. The two negatively charged electrons are shared between the two positively charged nuclei, making the molecule stable. Interestingly, the above is as incorrect as Aristotle's thoughts on gravity.

The above belongs to the field of study called quantum chemistry. Any one who has taken this course is reminded of some abstract models such as the particle in a box and the particle on a ring. These simple models are often applied to much more complicated systems. The particle in a box is sometimes used to explain the electronic properties of conjugated dye molecules:

A simple conjugated molecule is given below and the similarity is indeed striking. 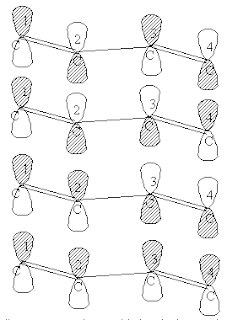 The particle on a ring serves as a model for benzene: 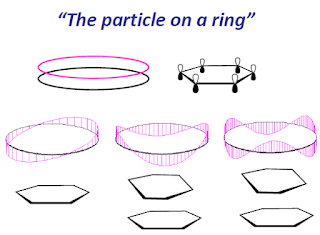 Both models, the particle in a box and the particle on a ring, do not involve attractive and repulsive forces. In fact, the relevant energies in these systems are purely kinetic, how fast the particle moves. Yet, these models can be applied to molecules. These obviously suggest that the stabilization in a chemical bond may not be due to a balancing between repulsive and attractive forces. Yet, we still teach chemical bonding, as demonstrated in one of the most popular textbooks, the explanation that seems appealing to our intuition.

Richard Muller and William Goddard III in a chapter in the Encyclopedia of Physical Science and Technology provide the mathematical reason why this thinking is wrong: 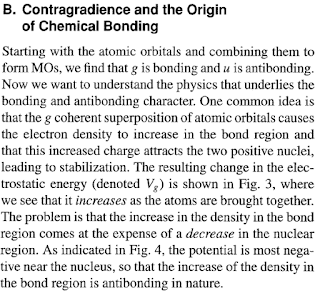 Muller and Goddard III, like Galileo, are experts in their fields. This therefore truly illustrates that critical thinking is expert thinking.