August 14, 2016
A lot can be said regarding how people could use statistics to mislead. It is therefore important to evaluate the source of information as well as biases that may be present in both sampling and analysis of data. Data can indeed provide correlations but one must be cautious in drawing a cause and effect relationship. There is a considerable interest in finding what correlates with crime. A reduction in crime rate can be easily claimed as an accomplishment by either policy makers or law enforcers. If the crime rate has really gone down, it is indeed an accomplishment. Nevertheless, it is still necessary to identify what factors are really responsible or significant. For this analysis, the size of the data as well as the length of time are consequential. One study, covering the period 1970-2008, shows that the crime rate in the Philippines correlates with wage rate, labor participation rate, and per capita income. In contrast, deterrence does not seem to impact significantly crime rates. 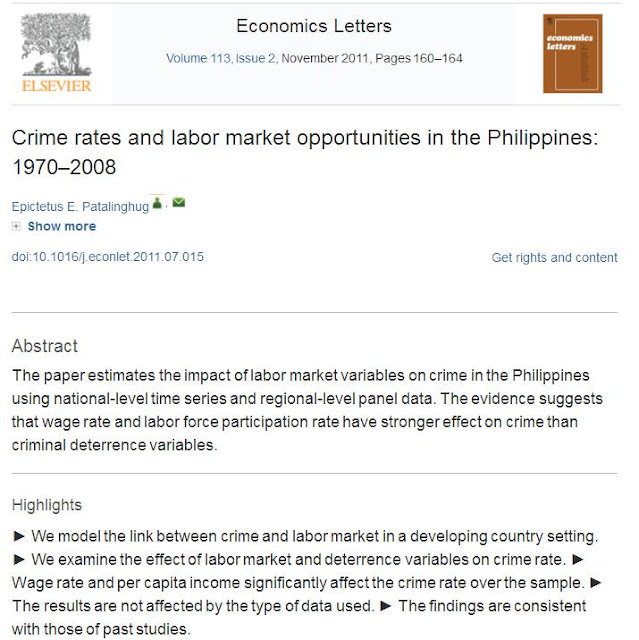 Similar findings have been made by Miguel F. Gillado and Tina Tan-Cruz. In their 2004 paper, Panel Data Estimation of Crime Rates in the Philippines, the following factors are shown to correlate strongly with crime:


Gillado and Tan-Cruz conclude, "The results show that the economic factors are the robust determinants of crime rates. This implies that generally, the more the stable the economy is, the lower the crime rates. Thus, it is recommended that policy makers should focus on the stabilization of the economy because it has a significant influence on the variation of crime rates." And similar to Patalinghug's study, no significant link between crime and deterrence is seen.

The number of school dropouts also correlates with higher crime. In the Philippines, both poverty and child labor are known to be the primary causes of school leaving. Thus, poverty can influence crime rates in more than one way.