Pope Francis Was Not Exactly an Angel in Elementary School

September 24, 2015
"He was a devil, a little devil, very mischievous, like every boy," said Sister Martha Rubino, mother superior of De la Misericordia school, as quoted in an article published by Agence France-Presse. Sister Rubino continued, "Who would have known that he would become pope!" Jorge Mario Bergoglio, now Pope Francis, apparently practiced the multiplication table aloud while skipping steps inside the school. Not much is known about the childhood of the current head of the Roman Catholic Church, but pictures do portray a happy childhood.

The pope remembers his early years of education and credits his first grade teacher as the person responsible for making him appreciate and love school.

Without any doubt, the young holds a special place in the heart of this pontiff. During one weekly address, Pope Francis said,

"...But children are never a mistake, and their sufferings are only reasons for us to love them even more. Every child who begs on the streets, who is denied an education or medical care, is a cry to God...."

Children are the most vulnerable members of society. That is why education serves not only to prepare young children for the future but also to safeguard them in the present. It is then not surprising for the pope to say the following paragraph in his address to the US Congress: 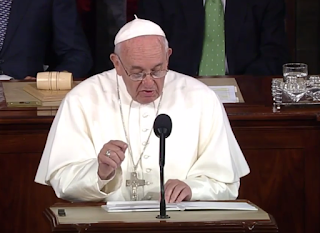 "In particular, I would like to call attention to those family members who are the most vulnerable, the young. For many of them, a future filled with countless possibilities beckons, yet so many others seem disoriented and aimless, trapped in a hopeless maze of violence, abuse and despair. Their problems are our problems. We cannot avoid them. We need to face them together, to talk about them and to seek effective solutions rather than getting bogged down in discussions. At the risk of oversimplifying, we might say that we live in a culture which pressures young people not to start a family, because they lack possibilities for the future. Yet this same culture presents others with so many options that they too are dissuaded from starting a family."

The problems of basic education are problems of our children. "Their problems are our problems."  All we need to appreciate this fully is the fact that Pope Francis, like any one of us, used to be a "little devil" in first grade.