Is Boron a Metal?

September 14, 2015
In DepEd K-12,  learners should be able to "distinguish mixtures from substances through semi-guided investigations" at the end of Grade 7. In Grade 8, students should "recognize that ingredients in food and medical products are made up of these particles and are absorbed by the body in the form of ions." Grade 9 introduces atoms and compounds and in Grade 10, pupils are taught "the importance of controlling the conditions under which a chemical reaction occurs." These italicized phrases are copied directly from the DepEd's K to 12 Science Curriculum Guide. The phrase "absorbed by the body in the form of ions" is, of course, a colossal error. Still, this mistake is dwarfed by how the science curriculum is structured.

DepEd K to 12 uses the spiral approach which provides students, one quarter of every year to learn chemistry during high school, which means students have passed two years hearing about mixtures, substances and ions before being taught atoms and molecules. Interestingly, it is a page from the learning materials in Grade 9 that has captured the attention of so many in a commentary published by the Inquirer: 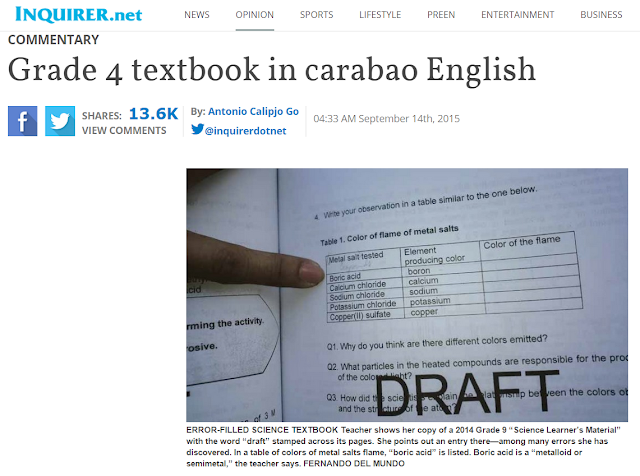 The above page comes from the Grade 9 Science Learning Materials drafted on March, 2014. The caption says that the teacher is bringing attention to a mistake in the learning material, boric acid is placed in a column under a heading that says "Metal salt tested". The caption continues by saying that "boric acid is a 'metalloid' or 'semimetal'". Boric acid is not a metalloid or semimetal. This is a compound. It is the element boron that is considered a metalloid or semi-metal. This mistake can be easily corrected by using "borax" instead of boric acid. Borax is sodium borate, thus, can be safely included in the list of metal salts. Borax is the salt formed, for example, when sodium hydroxide reacts with boric acid. Borax also gives a green color when placed in a flame, which shows that at least in this area, the table in the above figure correctly states that it is the element that is responsible for the color. Both borax and boric acid produce boron atoms when placed in a flame and these are the atoms responsible for the color that is observed.

This error is really inconsequential if the main idea behind this particular module is clear. With the above caption, it is not obvious if the teacher actually understands this module. The module is about atomic theory, specifically the electronic structure of matter.

Yes, you are reading it right, the learning material has the word "quantum" in it. In a flame, the salt is split into atoms. For instance. sodium and chlorine atoms are produced from sodium chloride. Since there is high thermal energy inside the flame, the atoms produced are not in their lowest energy state. This means the electrons are not in the lowest energy levels. When these electrons return to the lower energy levels, energy is released in the form of light and in the case of metals and metalloids, this energy corresponds to light in the visible region. Since electronic energy levels are discrete, the energy released is defined, thus explaining why only a specific color is sometimes observed.

The greater error in this learning material is not the wrong categorization of boric acid. The bigger mistake is in its poor treatment of light. This specific module has a short section on light, but it fails in providing the students what color really means and why some elements (mostly metals and semi-metals) are able to emit a specific color, while others do not. The following are the sections that mention light.

The figure showing supposedly an atomic spectroscope fails to emphasize that the light source is not an ordinary incandescent bulb. One can compare this figure with the one below:

With ordinary white light as source, one gets the following results instead, a continuous spectrum, not a line spectrum. 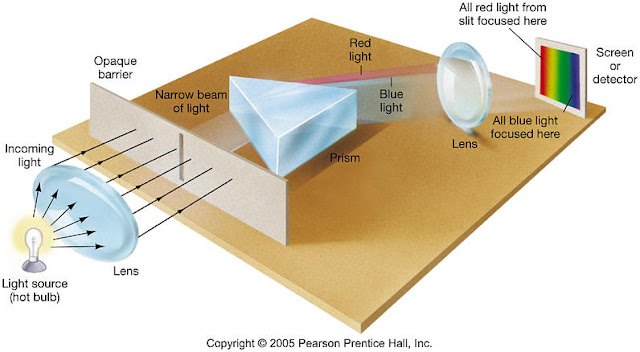 Given the poor or incomplete treatment of light, it is simply unreasonable to expect from both teacher and students to understand the concepts and activities in this particular module. What is wavelength? What is color? What is light? Unfortunately, these questions are not addressed in this module. These are likewise not covered in any of the physics modules.

The real mistakes are so much more than just superficial errors. These problems cannot be easily rectified by a word processor or liquid paper. These are not simple typos.