President Donald Trump often condemns history classes that tell the truth. Back in July, the Fairfax County School Board voted to rename Columbus Day as Indigenous Peoples' Day. The motion that was passed included the following statement: "Indigenous peoples have been and continue to be the victims of prejudice and systematic discrimination as a result of 500 years of oppression and violence that began with European colonization, and it extends to the systematic oppression indigenous people face today throughout the Americas." We might easily embrace, as Michael J O'Leary did, the words of Native American scholar Stan Rushworth: "the difference between a Western settler mindset of, I have rights and an indigenous mindset of I have an obligation. Instead of thinking that I am born with rights, I choose to think that I was born with obligations to serve past, present, and future generations, and the planet herself." In fact, these words may even serve as inspiration for us to rise up to address climate change and promote universal healthcare.

Reforming our history curriculum in basic education, however, must go much farther than romanticizing the original residents of this land. A project that my son did for his social studies class reminds me of how much we currently fall short of the curriculum that we need. 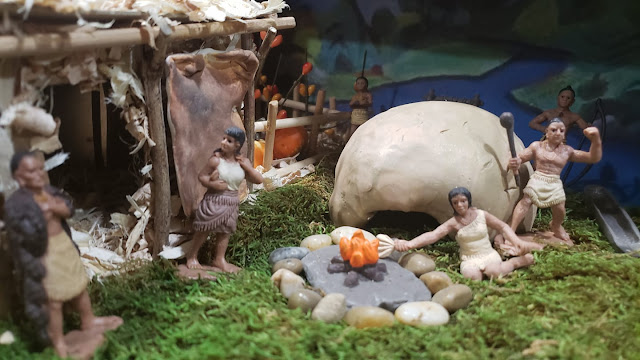 It is not enough to just learn about how we thought Native Americans lived. At the very core, we must emphasize how we treated them and how we continue to treat them.

Romanticizing Native Americans as people thinking as one with nature may make us feel good, but it misses the much more important lesson in history. Stan Rushworth has this to say regarding our basic education:

"And when the dominant person—which in this case I’m arguing, is in our country, the United States—when the people in the United States are unwilling to face the nature of the abuse, then there can really be no reconciliation. And so it’s very difficult to move forward in a mutually respectful manner. And so then the knowledge or the information—the methods that the dominant culture wants—can’t really be gotten, they can’t really be understood, because that dominant relationship is still being maintained.

The school system is a good example of it. I think there are only two states in the country, maybe three now, that require native written curriculum in K through 12. And so we’re maintaining a really deep ignorance of native history here, of native ways and exactly what’s going on, because the abuse has been so profound that the dominant society is afraid to look at it, I think, for fear of having to deal with guilt. For fear of having to deal with pain. And I think the society is kind of almost like a health, wealth, beauty cult in the sense that it doesn’t see pain as part of life and part of growth. It doesn’t see emotional pain. So it’s still holding out in a position of entitlement by saying, “Well, I didn’t do that, so I don’t have to deal with that.” So it’s not really looking at the mutually experienced trans-generational trauma that comes from the degree of abuse that’s happened. So a lot of native scholars today would argue that that the erasure in the school system is another form of cultural genocide, in a sense, because we continue to create generation after generation of ignorance of what the deeper issues are. If you want to show disrespect for a person, the biggest way to show that disrespect is to ignore their existence. That’s where disdain comes forward. And as far as I’m concerned, the American educational system is very guilty of that."

What Rushworth says about our education on Native Americans apply equally to the story of slavery, the oppression of Black people. President Trump's insistence on his brand of "patriotic education" simply ignores the truth in our history. Back in my homeland, there are also a lot of people who wish they could rewrite history. Such ignorance only condemns us to make the same mistakes.