Facts Have No Bearing On How One Feels

I would never ask students in my class if they believe in the Pythagorean theorem. Instead, the proper question would be: "Do you understand the Pythagorean theorem?" I would never ask students in my class whether they reject the notion that the earth is flat. What is appropriate is: "Do you know that the earth is not flat?" Facts have no bearing on how one feels. Asking someone about their belief has nothing to do with how well they understand. Some people may understand but may still reject to believe. So when Senator Kamala Harris asked the nominee for the Supreme Court, Amy Coney Barrett, whether climate change was real, it was not asking how well the nominee understood climate change. It was probing the nominee's character and identity. 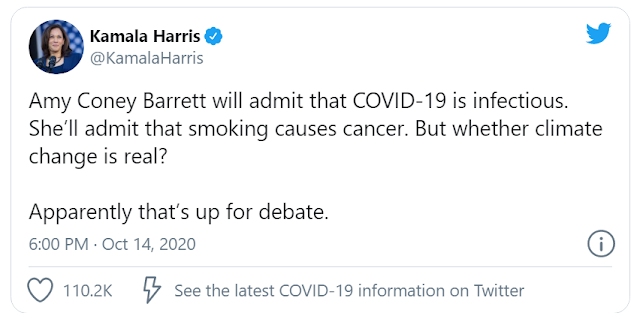 And Barrett's response suggests that she is deeply religious. There is nothing fundamentally wrong with being religious. Religion provides us with a different window from which we can view life and the world. Religion, after all, is an expression of our identity. Therein lies the difference between science and religion. In science, we are all bound by the laws of nature. We have no choice when it comes to facts. Science is not a matter of whether we believe or not. It is only whether we understand or not. Science is universal. What we believe is individual. I can only ask my class if they understand or not.