October 08, 2019
Paul Muschick at the Morning Call made it clear, "Partisan politics is a disease that shouldn't be spread to Pennsylvania school boards." Here, in Fairfax county, the election for school board is non-partisan but there is a growing concern that a candidate's party affiliation needs to be identified. Democrats, for instance, are worried that a minority candidate maybe mistakenly construed as a Democrat simply because the candidate is not a White American. Nonetheless, partisan politics should be quite obvious with just a little bit of attention. Down-ballot candidates receive endorsements from top ticket politicians (Senators, Members of the House of Representatives, State Legislators) while campaigning at the same time for the party. The patronage politics is actually quite clear. Muschick thinks partisan politics is a disease in school boards because board members will no longer be elected for who they are but for what their party believes in. And that is tragic. I would like our school board to have a teacher and a parent, not a Republican or Democrat. 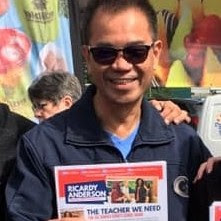 Arabic numerals are what we currently used in mathematics while Catholic priest Lemaitre's theory is the Big Bang theory. With these in mind, do we really want Democrats or Republicans on our school boards?

Lastly, important issues such as school instructional times, school building construction, laboratories and facilities, teachers' pay, advanced curriculum for all, equity in education, providing quality education to al children, improvement in school climate and safety, all of these cross political party lines. We need good people to address these issues. As Muschick points out, "Being a school board member already is a thankless job. Forcing candidates to become political could discourage good people from running."