Lessons From Our Children

September 12, 2019
The previous post on this blog, "Why Labeling Students as Gifted Is Wrong", received this comment from former Mason Crest Elementary School principal Brian Butler: "Maybe we will start to listen because it’s shared by a student, a young girl who was labeled “gifted!" What the student was saying, however, was exactly what evidence-based research had been informing us over the years. Nonetheless, there are indeed lessons to be learned from our children. My daughter has taught me more than once. She could really be a source of wisdom and this week, a story she wrote reminded me of one important thing we all need to teach our children. Here is her story which I think pretty much sends the same message as Linda Creed's lyrics in the song, "The Greatest Love of All". 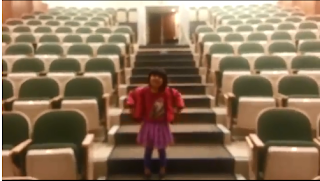 Long ago in New York City there was a wealthy family (The Jeffersons). They had everything but they were mean to anyone that was not as wealthy as they were. (Most of the town people were not as rich as the Jeffersons). So an evil hag had enough of all of this attitude and cursed the family. The curse was that the first born girl in the family would only have one eye. The only way to break the curse was for someone as wealthy as she was would love her even with just one eye. Luckily everyone had a boy until… Katy Jefferson.

Katy was the first girl that was in the family and the curse applied to her. She had one eye. Her parents were rich and they could not let Katy ruin their reputation, so they faked her death, she would not be on the news, and she was locked up in her house. Every day the mother and father would bring in boys to see if any of them would love her. No one did...Years went by but the boys simply ran scared for their lives. Katy started to hate herself even more.

Back in the city, rumor was that there was a girl with only one eye. Then an investigator hired someone, who was not wealthy, to go in there and take a picture to see if the rumor was true. So he went and Katy scared the boys as usual. She went back to her room. She was used to seeing boys ran away. But the man that was supposed to take the picture was still there. So she talked to him but she did not let him see her as she talked from the speaker. When they talked, the man realized that she was not a monster and fell in love no matter how she looked. (But remember the curse could only be broken by someone as wealthy as she was).

They ended the conversation when the man told her his name and said he would return tomorrow. His name was Alex Will. Alex could not give the picture to the investigator so he lied and the detective sent him back. Days went by. Alex kept on going to her house. But Alex knew that he could not break the curse.

Katy was so happy that she felt something she never felt before. She finally loved herself. Suddenly, she was surrounded by light then she looked in the mirror. “AAAAAAAHHHHHHH”, she shouted. She had two eyes. The curse was broken! At first, she thought it was a dream, but when her parents saw her, she knew it was not. It turned out, she was as wealthy as herself, and because she loved herself even with her looks, that broke the curse. That also meant she could be with Alex.

A few years went by and Alex and Katy had a family of their. They had a girl and a boy, Chloe Will and Jack Will, and they both had two eyes on there faces.

My daughter never fails to teach me important lessons.