August 20, 2018
With the new K to 12 curriculum in the Philippines, various tracks are now offered in the last two years of basic education. The various options available obviously make it possible for students to find themselves later unprepared for the courses they decide to take in college. A student, for instance, who finishes the accounting business management (ABM) strand in the senior high school academic track, is now required to take additional courses if the student chooses to enroll in a Science, Technology, Engineering and Mathematics (STEM) major in college. These additional courses which are now called "bridging programs" are either taken during the first year of college or over several weeks in the summer before college starts.


There are bridging programs in the United States, but these are different from the ones that are now appearing in colleges in the Philippines. In Coldwater High School in Michigan, for example, the "bridging program" is an option for students to earn college credits in high school. The "bridging program" in the Philippines is more like a set of remedial courses. In some cases, these remedial courses are given only over a few weeks. Below is an example from Saint Joseph College in Maasin, Leyte: 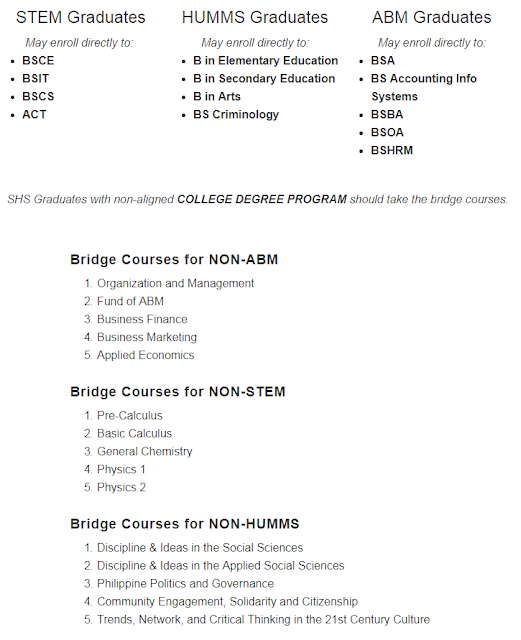 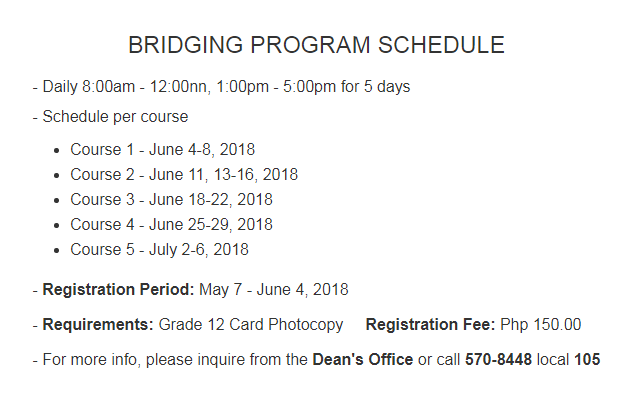 Looking at the above schedule, students are supposed to take a 5-day course in General Chemistry, each day for eight hours. The two weeks before that, these students have spent eighty hours on pre-calculus and basic calculus and the next two weeks, a total of eighty hours are devoted to physics. This is quite intense.

Obviously, these involve additional time, effort and money. The National Union of Students in the Philippines is clearly not happy with these bridging programs. The Union's recent statement is as follows:


[OFFICIAL STATEMENT ON THE BRIDGING PROGRAM]
August 19, 2018
The National Union of Students of the Philippines (NUSP) expresses grave concern over the Bridging Program required for the first wave of Senior High School (SHS) graduates that entered tertiary education this school year. The said program is for students who took SHS strands that are “mismatched” with their current tertiary education course. They are required to take additional subjects in order to “demonstrate the competencies” required of a graduate of a strand aligned with the course.
In the Polytechnic University of the Philippines (PUP), students under the Bridging Program are required to finish two additional subjects over two years just to be considered qualified to take their college course, while also taking the same subjects as students who do not have to take the Bridging Program.
In the University of the East (UE), the Bridging Program requires students to take General Education subjects first during the regular school year, and then enroll in their major subjects during the summer break. This entails around twenty thousand pesos (Php 20,000) in additional fees on top of their already bloated tuition and other school fees — a slap on the face of students and families whose pockets were emptied by capitalist-educators that profited from the K-12 program.
The implementation of the Bridging Program displays the failure of K-12 to produce college-ready graduates despite the additional two years in high school. Also, it exposes the rotten K-12 program as nothing short of a burden to the Filipino people. Its goal of producing "globally competitive and work-ready" graduates is in reality a scheme to enhance the capability of schools to become factories of cheap, docile, semi-skilled workers to meet global labor demands.
Duterte’s refusal to junk the K-12 program amid its numerous failures, including the Bridging Program, shows that his regime does not seek to address the chronic illness of our country’s education system. He only cares about preserving the reality of the K-12 program: a neoliberal attack on the fundamental right to education.
Duterte would rather generate profit for capitalists-educators and sell the Filipino youth to the global market as contractual laborers, rather than heed the demands of the youth in our decades-long struggle for nationalist, scientific and mass-oriented education.
It is high time for us students to strengthen unities to expose and oppose these attacks and maneuvers to our right to education. In a time of worsening socio-political crisis, it is the duty of the Filipino youth to mobilize and fight for the democratic interests of the Filipino people.
EDUCATION NOT FOR SALE!
WE ARE NOT FOR SALE!
JUNK K-12!

Students entering university with insufficient mathematics preparation for the courses they intend to study is an increasing problem. We show evidence of how withdrawal rates, failure rates, and final marks in a first year calculus unit are strongly associated with the level of mathematics studied at school, the assumed knowledge published for the degree and enrolment in a bridging course. Bridging course students were, on the whole, able to pass their first semester university calculus-based subject; however, they did not achieve at the level of their mathematically well-prepared peers.


The K to 12 curriculum in the Philippines with its tracks and strands basically forces students to choose a career path at an early age. The wrong choices made unfortunately have serious consequences.