School Suspensions: Are These Discriminatory Or Simply Wrong?

April 12, 2018
A recent report from the United States Government Accountability Office (GAO) brings me back to a post I made in this blog last October; How We Discipline Students in Schools Is "Trump-Like". When Republican presidential candidate Donald Trump mocked a judge for simply being a child of Mexican immigrants, we took notice. In 1972, when a black woman was told that nothing was available for rent in a Brooklyn complex managed by Donald Trump’s real estate company while a white woman was shown two available apartments in the same complex a few days later, the federal government filed a discrimination case against the Trump firm. And when Trump seemingly made fun of a reporter with a disability, we quickly denounced it. Yet, when we look at how our schools exercise disciplinary action, we see something frighteningly similar.


The findings made by GAO based on the Department of Education (Education) national civil rights data for school year 2013-14 are practially identical to the results shown above. Black students are overrepresented among students suspended out of school. Those who have disabilities are likewise overrepresented. And boys are much more likely to be suspended than girls. 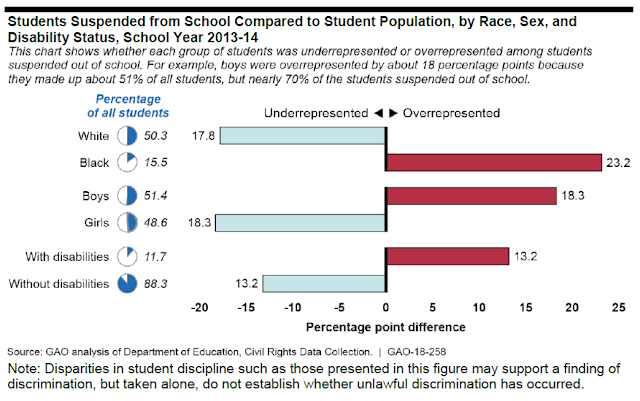 Examining the data with an eye on poverty reveals some trends. 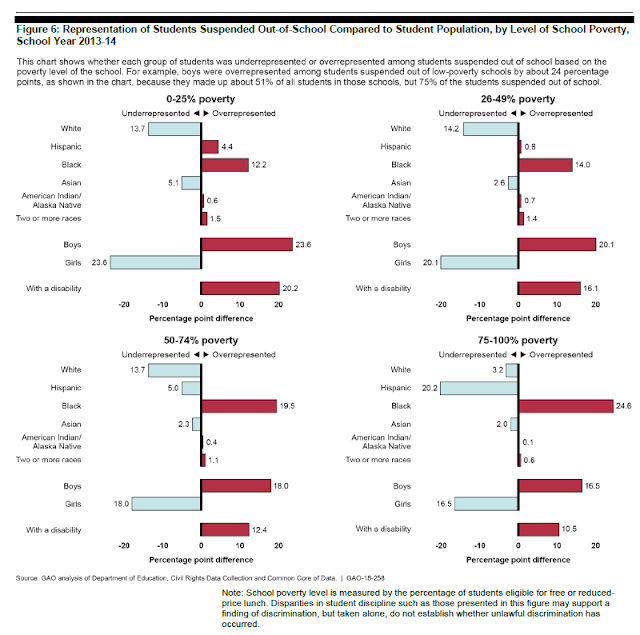 First, the disparity in school suspensions, blacks, disabled and boys getting suspended more, is present in all schools regardless of poverty level. However, the overrepresentation of blacks among those who are suspended increases with poverty. On the other hand, the overrepresentation of students with disabilities as well as boys decreases with poverty. One, however, should keep note that suspension rates go up with increasing poverty. The rate of suspension for schools attended mostly by rich children is only 2% while for schools attended mostly by poor children, the rate is more than 4 times higher, 9%. Therefore, the overrepresentation of students with disabilities and boys may appear to be decreasing with poverty, but in terms of numbers, suspensions are actually increasing. In a wealthy school, only 6.5% of students with disabilities get suspended but in a poor school, 17% do.

I checked if the above holds true for schools in my neighborhood, and apparently it does. In Falls Church High School in Fairfax county, Virginia, students with disabilities (IDEA) are overrepresented among those who are suspended: 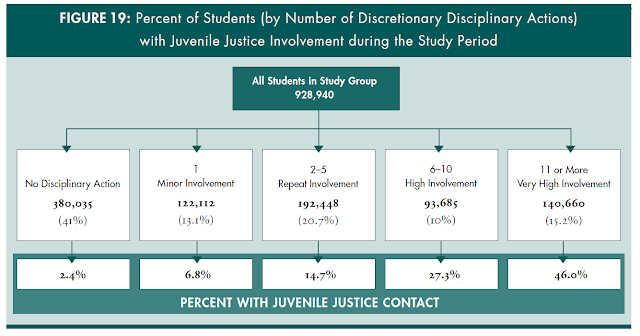 Half of students who have been suspended 11 or more times in school end up in juvenile court. Educators have some idea why children misbehave in schools. The GAO report provides the following figure: 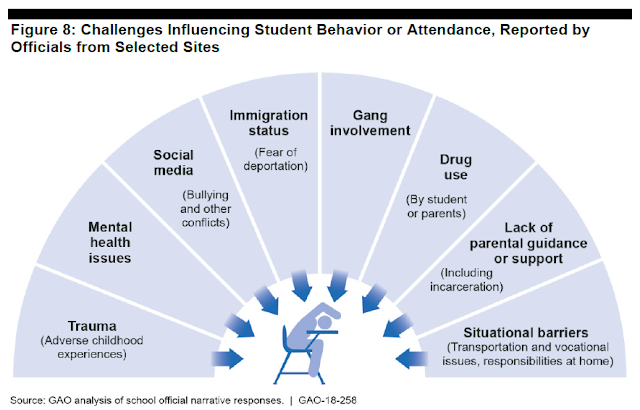 We should therefore ask ourselves if a school suspension actually addresses any of these factors. And now is a good time to ask. With the Parkland shooting, there are two competing voices we are hearing. One is from Jonathan Butcher at the Heritage's Center for Education Policy:


Of particular interest is a “Dear Colleague” letter issued by the Obama administration in 2014. This guidance from the Department of Education and the Department of Justice instructed school officials to “administer student discipline without discriminating on the basis of race, color, or national origin.”

Obviously, individuals should not be suspended or expelled from school just because of the color of their skin. But the letter was more than a simple warning on discrimination.
It also gave recommendations for how schools should discipline students without resorting to suspensions, expulsions, or law enforcement involvement (“exclusionary discipline”). And according to reports, dozens of school systems have adjusted their discipline policies accordingly...

...Washington is too far removed from neighborhood schools to issue and enforce guidance on school discipline across 50 states and 50 million students. As Broward families’ grief turns from anger and pain to hard questions about what went wrong, Washington should rescind its school discipline directives at the center of the tragedy.

Butcher partly blames the recommendations made by the Obama administration for the shooting in Parkland. On the other hand, Bonnie Watson Coleman and Fatima Goss Graves are clamoring for the opposite:

School suspensions are not just discriminatory. Suspensions do not help, which makes the fact that blacks, the disabled, and boys are more likely to be suspended a much greater travesty.